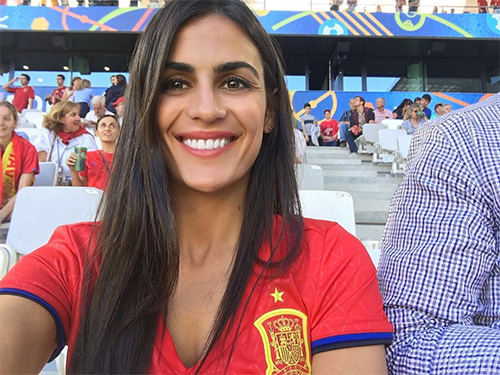 Hector Bellerin was clearly thrilled to count on the support of his stunning girlfriend as Spain suffered a surprise 2-1 defeat by Croatia on Monday.

The Arsenal defender was an unused substitute as Vicente del Bosque’s side were forced to settle for second place in Group D on Tuesday afternoon.

The defending European champions will face Antonio Conte’s impressive Italy side in the last eight of the competition in a repeat of the 2012 final.

The 21-year-old, who featured in Spain’s pre-tournament friendlies against Bosnia-Herzegovina and Georgia, still hasn’t made an appearance in his first major tournament.

But Bellerin is remaining in high spirits despite a lack of football partly in thanks to the support of his gorgeous girlfriend Berta Requeno.

The Arsenal defender paid tribute to her on his Instagram page as he posted a photo of the Spanish beauty in the stands.

Bellerin wrote: “Thanks for always being there for me! ❤️”

The Gunners star was named in the PFA Premier League team of the year for the 2015/16 season.