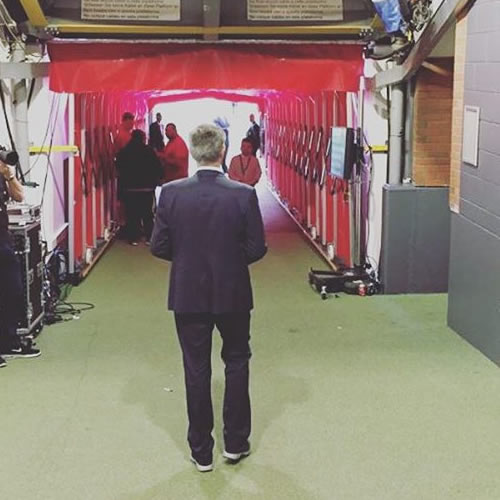 Jose Mourinho was getting familiar with his new surroundings on Sunday evening as he walked out onto the Old Trafford pitch for the first time since his appointment as Manchester United’s new manager.

The Portuguese coach has signed a three-year deal with the Red Devils after the Premier League club moved quickly to replace Louis van Gaal at Old Trafford.

Mourinho has been tasked with restoring United to the top of English football following the club’s decision to sack Van Gaal at the end of the season.

And the former Chelsea manager looked to be taking in his new surroundings as he made his way down the Old Trafford tunnel before Sunday evening’s Soccer Aid match at the Theatre of Dreams.

Mourinho posted the picture above on his personal Instagram account on Sunday afternoon and wrote: “Help the children @socceraid. Donate online or text GIVE to 70750.”

United finished fifth under Van Gaal last season and won the FA Cup in the Dutchman’s final game in charge.