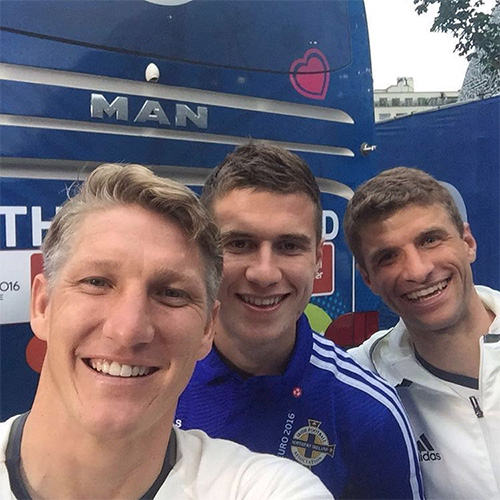 There were no hard feelings between Paddy McNair and Bastian Schweinsteiger after Germany were 1-0 winners against Northern Ireland on Tuesday evening.

McNair’s Northern Ireland team-mates battled to a valiant 1-0 defeat by the reigning world champions after Mario Gomez scored a first-half winner for Joachim Low’s side in the final Group B game.

The Manchester United defender was an unused substitute for Michael O’Neill’s side, while Schweinsteiger replaced Juventus star Sami Khedira in the 67th minute of their final group-stage game.

And the Red Devils pair posed for a selfie with former United target Muller following the Group C clash as McNair and Schweinsteiger cast their national rivalries aside.

Muller posted the above photo and wrote: “With @bastianschweinsteiger and Paddy McNair #esmuellert #diemannschaft #euro2016”

The Bayern Munich striker hit the woodwork in the 1-0 victory over Northern Ireland as Germany collected seven points from their three group-stage games.

O’Neill’s side, meanwhile, finished on three points after beating Ukraine 2-0 but losing to Poland and Germany.