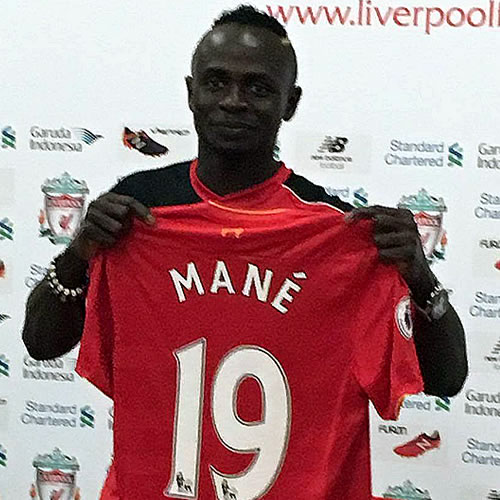 Sadio Mane has used his Facebook page to send a message of thanks to Southampton fans after he officially signed for Liverpool on Tuesday afternoon.

The forward signed a long-term contract with the Reds after days of speculation linking the former Southampton man with a transfer to the Merseyside outfit.

The 24-year-old will be hoping to establish himself as a regular fixture in the Liverpool first team next season in what will be Jurgen Klopp’s first full campaign in charge at Anfield.

Mane – who will officially become a Liverpool player on 1 July – was clearly thrilled to finally complete his transfer after undergoing a medical on Monday.

The striker – who will wear the number 19 shirt at Anfield – shared the photo above on his personal Facebook page and wrote: “Ready for a new chapter!

“Proud to be a Red now – proud to play for one of the biggest clubs in the world with a huge history, a great coach and looking forward to hearing my first “You’ll never walk alone” from fantastic supporters in a great Stadium!

“Thanks to Southampton FC for two fantastic years and to all the supporters, coaches and teammates who always believed in me!”

Liverpool are still believed to be on the lookout for a number of new signings this summer as Klopp gears up for his first campaign in charge at Anfield.