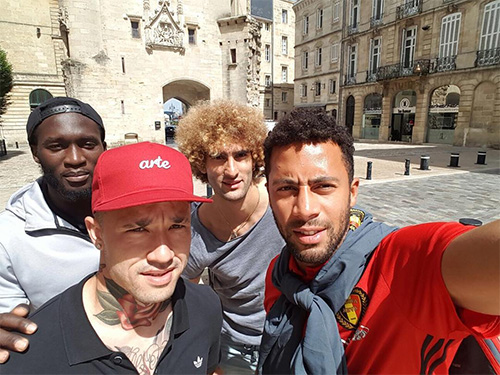 Moussa Dembele was all smiles with Romelu Lukaku, Marouane Fellaini and Radja Nainggolan as the Belgium trio relaxed on their day off.

The Red Devils booked their place in the quarter-finals of the European championship courtesy of a comfortable 4-0 victory over Hungary in the previous round.

Lukaku has failed to score in Belgium’s last two games against Sweden and Hungary, although the Everton striker netted twice in a 3-0 victory over the Republic of Ireland in the group stage.

The Toffees star has been linked with a potential move to Manchester United in recent month but Arsenal have since emerged as one of the favourites to sign the Belgium international.

And perhaps Lukaku quizzed Dembele on the lure of north London as the Premier League duo relaxed with Fellaini and Chelsea target Nainggolan.

Dembele posted the above selfie and wrote: “Sightseeing in Bordeaux 👍”

Belgium will take on Wales in the Euro 2016 quarter-finals at the weekend.