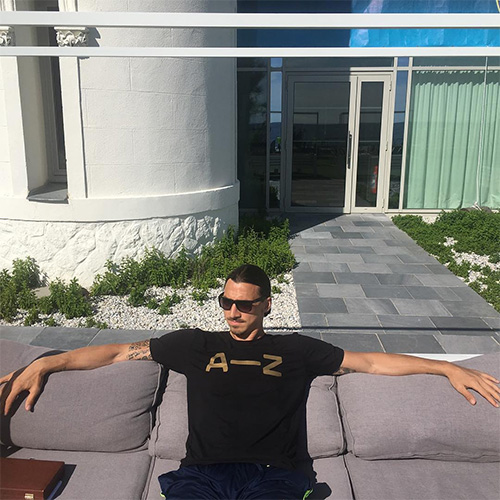 Zlatan Ibrahimovic isn’t letting the furore surrounding his next move get under his skin as the Sweden striker relaxed on Wednesday afternoon.

The 34-year-old is set to become a free agent when his current Paris Saint-Germain contract expires later this month after playing his last game for the Ligue 1 champions last month.

The Red Devils are the favourites to sign the towering Swedish striker, although Bundesliga champions Bayern Munich are thought to be interested in signing the former AC Milan star.

Ibrahimovic was unable to inspire Sweden to victory over the Republic of Ireland in their Euro 2016 opener earlier this week after a 1-1 draw in their Group D opener.

But the outgoing PSG centre-forward was putting his feet up for a well-earned rest on Wednesday afternoon as he soaked up the rays ahead of Sweden’s next European championship fixture against Italy.

The Swedish forward won his fourth Ligue 1 title in his final season at Parc des Princes.