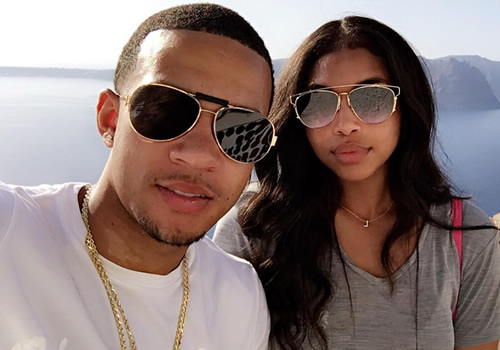 Memphis Depay is on holiday with his girlfriend in Santorini Photo: Lori Harvey/Instagram

Memphis Depay does not appear to be letting the speculation about his future at Manchester United affect him as he enjoys his summer holiday with his girlfriend in Greece.

The Netherlands international is currently enjoying some downtime on the island of Santorini with his partner Lori Harvey before he prepares to report back to Carrington for pre-season training next month.

Depay’s future at United has been a source of speculation in recent weeks following the appointment of Jose Mourinho as the club’s new manager.

The winger has been linked with a move away from Old Trafford after he failed to impress in the Premier League following his big-money transfer from PSV Eindhoven last summer.

However, Depay looked to be completely relaxed as he chilled out with his girlfriend on Thursday on the sunny island.

Lori Harvey posted the picture above of the couple on her personal Instagram account and wrote: “My Love”.