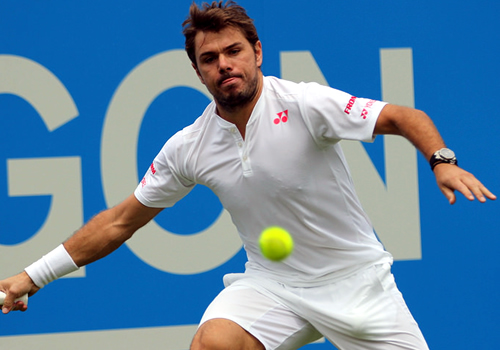 There are not many tournaments aside from the Majors themselves that feature four Grand Slam champions on one opening-day schedule. But such was the line-up at the Aegon Championships when two days of matches were concertinaed into one by the blight of this summer, rain.

With no byes to the second round, even the top two seeds had to be ready for action from the word go: Andy Murray at the top and Stan Wawrinka at the bottom. They followed one another onto the pristine, lush Centre Court, both playing opponents that made mouth water: Murray against the champion from ‘s Hertogenbosch just the day before, Nicolas Mahut, and Wawrinka one of the men with as much weight behind his shots as the Swiss, Fernando Verdasco.

Such was the line-up, indeed, that the third Grand Slam champion, and the champion here in 2012 Marin Cilic, was moved from centre stage to No1 court, followed two matches later by the fourth, Juan Martin del Potro, playing here with a protected ranking.

And it was not as though Cilic and del Potro were drawn against outsiders, either. The Croat, seeded No5, was up against one of the best unseeded grass-court players in the tournament, Feliciano Lopez, three times a quarter-finalist at Wimbledon and runner-up at Queen’s in 2014. Del Potro played the No7 seed John Isner, owner of two grass titles from Newport.

Even further down the pecking order, the champion here in 2010, Sam Querrey—playing the No6 seed Roberto Bautista Agut—was out on Court 9, while last year’s runner-up, and ranked 20, Kevin Anderson played Bernard Tomic on Court 2.

The first test of the various new Grand Slam coaching partnerships on show, however, came with Wawrinka, who announced just as he set sail for London that he was welcoming former Wimbledon champion Richard Krajicek into his team. Neither man anticipated great advances so soon in the Swiss man’s game, but many watching from the sidelines would be keen to spot any tactical changes.

Surprisingly for two men already into their 30s, they had met only four times before and shared the honours, but their only recent meeting, at Wimbledon last year, was a straightforward victory for Wawrinka.

Now, he was far from comfortable for the first set, not helped by rain starting just as they began to play. Verdasco, in contrast, seemed little bothered, broke immediately, and after a brief hold-up on court, broke again for a 4-1 lead.

The Spaniard has been known to buckle under pressure, but threatened by break points, he still held for 5-1 and closed out the set, 6-2 in quick order.

The sun briefly making an appearance seemed to lift the pace and confidence of Wawrinka in the second set, but while he was winning most points on his first serve, he was only hitting the box 46 percent of the time and it was still the Swiss who had to defend break point.

Trouble loomed over the horizon, though, as vast black clouds swept into view, and as the clock hit one hour and the scoreboard 4-3, the heavens opened.

The break would last over two hours, and there was certainly some urgency about Wawrinka’s tennis when they returned. He looked certain to get the break in the eighth game, forcing Verdasco through two break points and four deuces, the Spaniard again stood his ground to wrong-foot the Swiss time and again.

Two love holds and they were 5-5, as the black clouds rolled in again and the temperature dropped, they headed to a tie-break.

Verdasco opened an immediate gap, 3-0, as Wawrinka mistimed the bounce and the spin. A smash put long and he was 1-5 down, and the crowd’s favourite was writ large when the Spaniard fired a forehand winner down the line for four match points: the place erupted into chants for Verdasco. A winner onto Wawrinka’s baseline—by a couple of millimetres—did the trick, and Verdasco had put out the No2 seed, 7-6(3).

Wawrinka was, naturally, disappointed, saying afterwards: “Grass court, it’s always a challenging surface for my game. I need quite a lot of practice to play my best game. And I tried today with what I had, but I need more time I think to get my level there.

“I had only one day of practice I think Friday, and I know that with my game I always need more practice, more time on the grass to feel it a little bit better.

“[But] today Fernando was playing well, was playing aggressive. When the grass is quite fast, you need to be the aggressive player. He was better than me today.”

Next up for Verdasco is Tomic, who beat Anderson 6-3, 6-4. The Spaniard admitted: “Hopefully I will keep even getting better and more adapted to the grass and play better every match every day.”