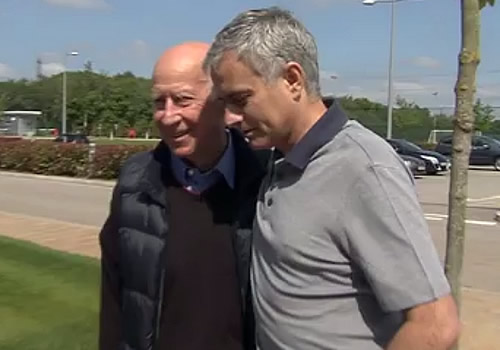 Sir Bobby Charlton told Jose Mourinho that he was very pleased to see him after the Portuguese coach’s appointment as Manchester United’s new manager.

Mourinho was shown around United’s Carrington training complex on Monday after signing a three-year deal to become the club’s new manager last week.

The newly-appointed manager was given a tour of the training ground by the club’s executive vice-chairman Ed Woodward, and Mourinho spent a few minutes chatting to United legend Charlton.

And Charlton was quoted as saying by MUTV: “I’m very happy to see you.”

And Mourinho later joked as he put his arm around the United legend: “You killed my country’s dream in 1966, but even so, all the best.”

As the pair said goodbye, Charlton added: “Congratulations on being Manchester United’s manager.”

Mourinho is expected to begin Manchester United’s summer recruitment drive in the coming days as he looks to build a team capable of winning the Premier League title next season.

The Red Devils are looking to bounce back from a disappointing season in the Premier League, as they missed out on Champions League qualification following their fifth-placed finish.