Stan Wawrinka’s high hopes with Krajicek: ‘I feel I can play my best game on grass’

"I’m always looking to try and improve, see how I can do the best with my game" 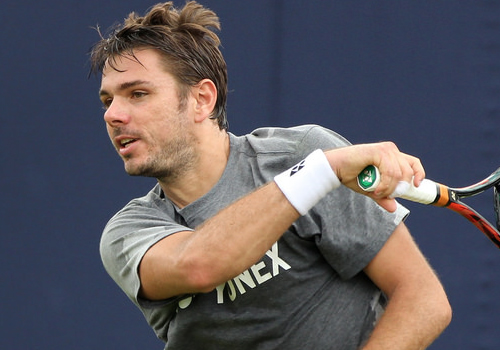 As the tour turns to grass, no fewer than three top-10 men, all of whom might command decent odds of denying world No1 Novak Djokovic his shot at defending the Wimbledon title, have turned to former Grand Slam champions for a little edge on the green stuff.

Yesterday, Andy Murray announced that he would reunite with Ivan Lendl, a former No1, and winner of eight Grand Slams singles titles from 19 finals. Lendl, in their previous two-year partnership, steered Murray to Olympic, US Open and Wimbledon titles in the space of 12 months.

Before the rain was dry on his racket in Paris, Milos Raonic announced the arrival of another former No1 and three-time Wimbledon champion John McEnroe as consultant in a coaching team that already contains Carlos Moya and Riccardo Piatti. Raonic made no secret of what he sought from this appointment: “I want to improve coming forward, and I want to improve putting more pressure on my opponents. I was a lot more efficient at the beginning of the year coming forward, and it’s something that I would like to give a lot of attention to—and it just works with grass.”

The third man to jump on the ‘super-coach’ bandwagon is current No5 Stan Wawrinka, already a Grand Slam champion on both hard and clay courts. He announced that he will work with Richard Krajicek, whose only Grand Slam title came exactly 20 years ago—on Wimbledon’s grass. The message was loud and clear: He wants to win on grass—and believes that he can.

Talking at The Queen’s Club ahead of the launch of his grass campaign at the Aegon Championships this week, he admitted that he had found grass something of a challenge when he was young, but that he now has the kind of game that could flourish on the sport’s fastest surface.

“When I was young, it was very difficult on grass because I always needed time with my game. [But] I think the last few years, I played a really good game, and I feel that I can also play my best game on grass.

“But there is a lot of space for improvement, especially how you feel when you come to the net, how to finish points, where to serve, all those little things. When you are on grass you have less time and need it to come automatically.”

Krajicek was a very different player from Wawrinka, one who played in an era where serve-and-volley tennis still had a strong foothold on grass. He won while Pete Sampras was in his heyday and followed in the footsteps of great serve and volley exponents such as Stefan Edberg, Boris Becker and, of course, McEnroe.

And while the courts of Wimbledon may not play quite as fast now, there has been something of a renaissance in the tactics and skills that flourish on grass like nowhere else: the chip-and-charge, the oh-so-low cross-court sliced backhand, the skidding serve, and the net charge.

For tennis has become increasingly populated by men playing into their 30s, and maintaining their form after more than 15 years at the top. And in seeking greater longevity, they have sought shorter rallies and matches. It is no accident that Roger Federer, who has played amid the metronomic baseline skills so engrained in tennis of the 21st century, took on one of the finest volleyers of the late 80s, Edberg, to inject fresh attack into his game.

Look no further than this week’s grass results as proof that a mixed palette of shots continues to bear fruit. The 34-year-old Nicolas Mahut, a serve-and-volley player to his fingertips, has just won his third grass title in the Netherlands, while one of the new breed of players, fellow single-handed Dominic Theim, has taken the Stuttgart title, even beating Federer at his own game along the way.

“When somebody is ambitious and he’s got the huge game, he has the tools to beat anybody and hit anybody off the court… and also just the talent, the ability to really improve on his game.”

The towering Raonic believes he can use his huge serve to similar effect, and Wawrinka clearly thinks that his famed one-handed backhand, in combination with his own big serve, has the flexibility and touch to devastate on grass as much as on clay and hard courts.

He could be right, though like Federer, he is aware that he needs to find fresh and efficient ways to win matches, for he is one of that band of 30-somethings. As he said, in talking about the difficulty of scheduling the Rio Olympics this summer: “I’m 31 years old, and need to be a little bit careful.”

The younger Swiss, though, is a relatively late bloomer, with all but two quarter-final runs at the Majors coming in the last three years of more than a decade on the pro tour. The same is true of Wimbledon, where he did not reach the quarters until 2014, and then did so again last year.

But over the years, he has dipped in and out of pre-Wimbledon events with mixed results. Two visits to ‘s Hertogenbosch yielded a first round exit and a final run. He has not been to Halle since 2007, and lost both his openers there. But perhaps the experience of playing Queen’s Club for the last two years ahead of those quarter-final runs in SW19 has changed that approach, for he is back again this year.

Even so, Wawrinka was at pains this weekend to stress that it is not just on grass where he sees room for improvement or Krajicek’s sole contribution.

“It was something that Magnum [Norman, Wawrinka’s coach since 2013] and I started to talk about a few weeks ago, to maybe trying to add someone.

“I’m always looking to try and improve, see how I can do the best with my game… But it’s not only about grass, it’s about my game in general. I think it’s a good time to do it, when I’m in London for two or three weeks in a row.

“[Richard] has won Wimbledon. He has a nice aggressive game, amazing volley. First I think [he can bring] experience as a player and a champion. And also if you look at his game, he can help me with my attack game, my volley, a few things that maybe can make some difference.”

Norman, an inspired appointment to the Wawrinka camp who boosted the Swiss man’s confidence and turned him from almost-ran into Grand Slam champion in Australia less than a year later, joins Wawrinka and Krajicek in London shortly.

“When Magnus comes, we will work out how to work together, but I am really happy with Magnus. We are really excited about the new addition to our team. Adding a former Wimbledon champion can only further my knowledge and understanding of the grass.”