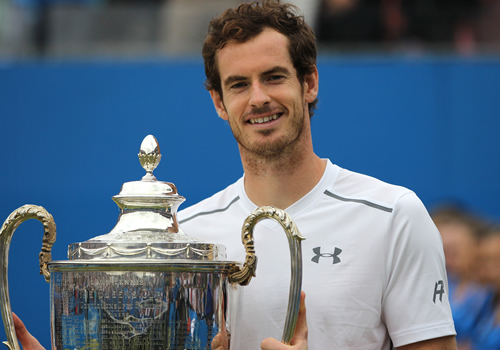 The top two men in tennis, Novak Djokovic and Andy Murray, will be the No1 and No2 seeds at the All England Club when the Wimbledon Championships get under way on Monday.

On the women’s side, the world Nos 1 and 2, Serena Williams and Garbine Muguruza, top the seedings.

Both draws, however, will be missing one significant top player through injury.

Rafael Nadal, back to No4 in the world rankings despite his withdrawal after two matches at the French Open last month, will have to miss Wimbledon as he continues to rehabilitate the same wrist injury. That promotes No5 Stan Wawrinka into the valuable No4 seeding: He and No3 Roger Federer cannot thus encounter Djokovic, Murray or each other before the semi-finals.

A further beneficiary is the newest man in the top 10, and winner on the grass of Stuttgart earlier this month, Dominic Thiem, seeded No8.

Nadal, who has won 14 Major titles, was unable to defend his first Wimbledon title after pulling out in 2009 with knee injury. He came back the next year to win his second title, but after reaching the final the following year, he has made it past the second round only once, a fourth-round run in 2014.

Then today, the two-time Australian Open champion and No6 seed Victoria Azarenka also withdrew, and with the same knee injury that forced her retirement in her opening match at the French Open.

Azarenka, who has been plagued by injuries over the last couple of years, was a quarter-finalist at Wimbledon last year and has twice reached the semis.

The biggest advantage among the women goes to the oldest seed, 36-year-old Venus Williams. The elder Williams sister, a five-time champion at Wimbledon, is currently ranked No9, but a boost to the No8 seeding means she cannot meet a higher-ranked player until the quarter-finals.

But Briton Johanna Konta, seeded at Wimbledon for the first time after a surge in form and ranking from 126 this time last year, has also benefitted. She rises from No17 to No16, so cannot now draw a higher-ranked player before the fourth round. Remarkably, Konta was only a wild card at last year’s tournament, and lost to Maria Sharapova in her opener.

Another perk for the ever-improving Konta is behind the scenes: She will be in the select locker room reserved for the top 16 players.

At the bottom of the seedings, Lucas Pouille, who enjoyed a fine clay swing to break inside the top 50 for the first time, grabs his first Major seeding at No32. Meanwhile, Andrea Petkovic slips into the seedings in the women’s draw despite a troubled season of early losses.

A couple of the men’s seeds have also bucked the rankings courtesy of Wimbledon’s unique formula that takes into account a player’s performance on grass in the previous two years.

As a result, Richard Gasquet, who made the semis of Wimbledon last year, has the not inconsiderable shunt from No10 to inside the top eight at No7.

Marin Cilic, a quarter-finalist at Wimbledon last year and a semi-finalist at Queen’s last week, rises form 13 to No9.

Britons in the main draw

Nick Kyrgios, who was outside the top 16, is now at No15, with Gilles Simon rising to that useful top-16 cut-off from No20. Other risers are Ivo Karlovic, up to 23, Sascha Zverev, in his debut as a Major seed, up to 24, and Sam Querrey from outside the seedings and up to 28.

The same formula is not applied to the women’s draw.

· Singles champions each win £2 million for the first time.

Previous Wimbledon finalists in draw in addition to champions

· Women: Agnieszka Radwanska (once), Sabine Lisicki (once), Eugenie Bouchard (once), Garbine Muguruza (once)

Wimbledon 2016: Historic run for Djokovic could be halted by Federer and Murray