Wimbledon 2016: Historic run for Djokovic could be halted by Federer and Murray

A look ahead to the men's draw at Wimbledon 2016, as Novak Djokovic prepares to defend his title at SW19 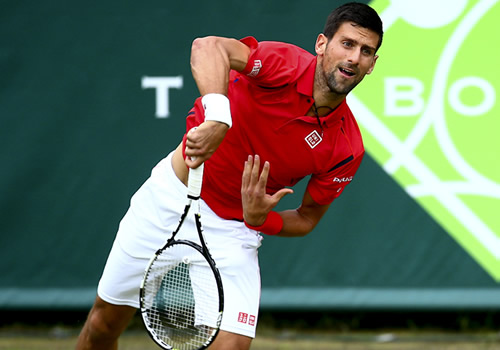 Novak Djokovic has won three Wimbledon titles in the last five years, and when he takes to Centre Court next Monday afternoon, he will be going for his third in a row.

More than that, since the world No1 triumphed here in 2014, he has failed to claim just two of the eight Major titles on offer—and reached the final of one of those too. And all that took him into the company of a very select band of men. Only Rod Laver and Don Budge have held all four Major titles at the same time.

Now Djokovic is attempting to achieve something even more special: the Calendar Grand Slam—that is, all four Majors in a single year. Through tennis history, whether men or women, only five players have done it: Laver and Budge on the men’s side, and Margaret Court, Maureen Connolly and Steffi Graf on the women’s. And just one has done so in the Open, era: Graf.

It so happens that when Graf got ‘The Slam’, it became still more significant. It was Olympic year, and she won gold for a unique Golden Slam. Now Djokovic could do the same.

Of course, first there is the small question of winning three of the most difficult titles in tennis in the space of three months. The Rio Olympics are swiftly followed by the US Open, and before them, he has to take on the green, green grass of London.

As is his habit, and unlike his fellow top-10 players, Djokovic has shunned any grass tournament since Paris’s clay—just one exhibition match at The Boodles on the stately lawns of Stoke Park—but that has not stopped him from beating the most successful grass-court champion of the Open era, Roger Federer, in the last two finals.

No third final for Djokovic and Federer

However, they will not meet in the final this year, for Federer—ranked No3 after a season blighted by injury and illness restricted his match tally to just 22—is drawn in the Serb’s half. The most that Wimbledon can expect is a semi-final clash between its most prolific champions—three to Djokovic, seven to Federer.

Djokovic, who already has six titles and a 44-3 record this year, is hotly tipped to make it all the way to the final weekend again, particularly as the highest ranked man in his quarter is No6 seed Milos Raonic, who has won only one set against the Serb in seven matches. The form of Federer, however, remains uncertain.

So troublesome was the back injury that resurfaced ahead of the Madrid Masters that the Swiss star pulled out of Roland Garros, his first missed Major after 65 Major appearances.

The switch to grass did not yield his usual pre-Wimbledon title, either: just two semi runs in Stuttgart and Halle. It was perhaps not surprising, though, that he looked a little rusty, a little undercooked in succumbing to two of the in-form young players to make such big strides this season, Dominic Thiem and Sascha Zverev. He has avoided both in his section of the draw this time, but faces the likes of Kei Nishikori, Marin Cilic and Gael Monfils if he is to make that appointed semi-final.

Will Murray’s feat of clay lead to grass glory?

Federer’s clay and spring has been thrown into sharp relief not just by Djokovic’s season but also by Andy Murray’s.

The No2-ranked Briton followed an outstanding clay season—final at the Madrid Masters followed by the title at the Rome Masters, plus his first final at Roland Garros—with a record-making fifth title at Queen’s.

Murray, the 2013 champion and winner of Olympic gold on London’s lawns in 2012, is second only to Federer in grass titles in the Open era, and he comes here reunited with Ivan Lendl, the man who oversaw Murray’s Grand Slam and Olympic victories.

Early rounds look straightforward, but as the second week approaches, things get more tricky—and very familiar. For Murray could face precisely the same men in the same order that he played in the French Open: Richard Gasquet in the quarters, Stan Wawrinka in the semis and Djokovic in the final. All three matches went to four sets, though Murray this time has home advantage—and grass.

It is not just Murray’s second-week line-up that looks familiar. The fall of the British men within the draw has the look of Queen’s about it. There, four men out of the eight in the top quarter were Britons, so Murray ended up playing two compatriots in a row having not played a Briton on the tour since Tim Henman a decade before.

This time, he finds a different Briton, wild card Liam Broady, in his opener. And their compatriots have done little better.

Aljaz Bedene has drawn No7 seed Gasquet in his first match, while James Ward has drawn Djokovic—with Kyle Edmund as a possible for the winner. Alexander Ward, too, faces an uphill task in No11 seed David Goffin, who stands at a career-high after his best season to date.

Also in this quarter is Brydan Klein, up against a great grass exponent in s-Hertogenbosch champion Nicolas Mahut, while Daniel Evans has a winnable opener against Jan-Lennard Struff. But should he make the third round, he could meet Federer.

Tennis has been on the look-out for the next big name who may break the glass ceiling erected by Federer, Djokovic, Murray, Wawrinka, and the missing Rafael Nadal. And this year, some names have certainly emerged from the pack.

The charismatic teenager Zverev has made two finals in quick succession, on Nice’s clay and Halle’s grass. He beat Federer on grass, held match-point over Nadal at Indian Wells, and has half a dozen top-20 scalps to his name this season. His surge has earned him a seeding at the Major for the first time, at No24.

As luck would have it, he is drawn in the same eighth as the outstanding new name in the top 10, Thiem, for what could be a fourth meeting this year for this exciting budding rivalry. The 22-year-old Austrian has won four titles from five finals, and made his first Major semi-final at Roland Garros. Each of his matches against Zverev has been close, but he will be wary of Florian Mayer in the first round, who last week beat Zverev to the Halle title.

No15 seed Nick Kyrgios, who made the quarters in his first Wimbledon appearance while still a teenager, has an intriguing opener against one of the veterans of the tour, the canny Radek Stepanek, and finds himself in a segment packed with flair: Dustin Brown, Fabio Fognini and Feliciano Lopez. But he is also drawn to face Murray in the fourth round. The Briton has won all four previous matches but they have never played on grass.

One more tall, powerful teenager, Taylor Fritz, could cause a big name some problems. He faces Wawrinka in the first round, and rides a career-high 63 after making his first tour final in Memphis and the quarters in Acapulco.

The Swiss has taken on former Wimbledon champion Richard Krajicek to fine-tune his grass tennis after two quarter-final runs here, but he will not relish seeing the returning former semi-finalist Juan Martin del Potro looming in the second round.

Top seeds round by round

NB Top half begins on Monday

No1 Novak Djokovic
R1 James Ward
R2 Adrian Mannarino or Edmund
R3 First seed No28 Sam Querrey
R4 No13 David Ferrer or No21 Philipp Kohlschreiber
QF No11 Goffin, No20 Kevin Anderson, No27 Jack Sock, No6 Raonic are seeds
SF No3 Federer, No16 Gilles Simon, No9 Cilic and No5 Nishikori are possibles

No3 Roger Federer
R1 Guido Pella
R2 Ricardas Berankis or qualifier
R3 First seed No30 Alexandr Dolgopolov
R4 No17 Monfils or No16 Simon
QF No9 Cilic, No23 Ivo Karlovic, No29 Pablo Cuevas, No5 Nishikori are seeds
SF No1 Djokovic, No13 Ferrer, No11 Goffin, No6 Raonic are possibles

No4 Stan Wawrinka
R1 Fritz
R2 Stephane Robert or del Potro
R3 First seed No32 Lucas Pouille
R4 No14 Roberto Bautista Agut or No19 Bernard Tomic
QF No8 Thiem, No31 Joao Sousa, No24 Zverev, No10 Tomas Berdych are seeds
SF No2 Murray, No15 Kyrgios, No12 Jo-Wilfried Tsonga, No7 Gasquet are possibles

No2 Andy Murray
R1 Broady
R2 Yen-Hsun Lu or qualifier
R3 First seed No26 Benoit Paire
R4 No15 Kyrgios or No22 Lopez
QF No7 Gasquet, No25 Troicki, No18 John Isner, No12 Tsonga are seeds
SF, No8 Thiem, No10 Berdych, No14 Bautista Agut, No4 Wawrinka are possibles

Roger Federer ‘back at my favourite tournament, ready to enjoy Wimbledon’