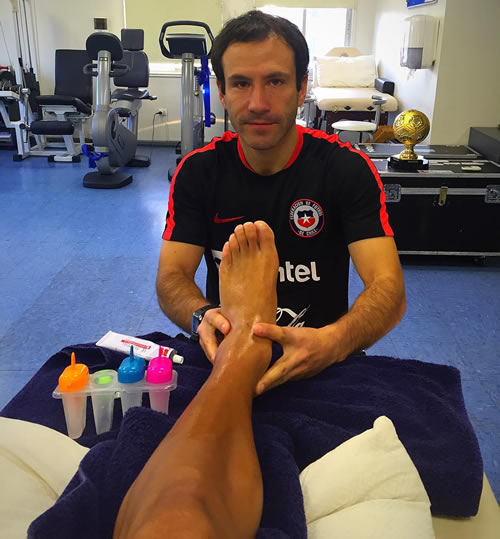 Alexis Sanchez has taken to social media to reveal that he is still receiving treatment on his ankle after suffering an injury during the Copa America final last month with Chile.

The Arsenal forward came off the worse when he collided with Argentina defender Gabriel Mercado in extra-time of Chile’s triumph against Lionel Messi’s men.

Sanchez is now officially on his summer holidays as he recharges his batteries ahead of the new Premier League season.

But although he has enjoyed a trip to Miami in recent days, he has now headed back to the national team’s training base in Chile to receive further treatment on his injured ankle.

Sanchez shared the photo above of himself with one of the team doctors on his personal Instagram account and wrote: “Having treatment with Dani to get better soon.”

Arsenal supporters will of course be hoping that Sanchez’s injury does not prove to be serious as the new Premier League season draws ever nearer.

Sanchez – who joined Arsenal from Barcelona in 2014 – was missing for the crucial festive period last season after suffering a muscular injury in the lead-up to Christmas.

The former Udinese star helped Chile win their second Copa America in as many years last month and will be hoping to inspire Arsenal to some silverware next season after their trophyless campaign last term.