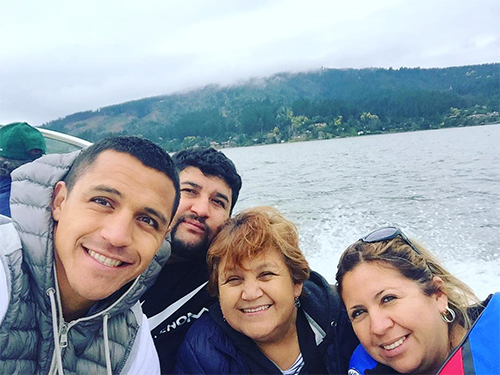 Alexis Sanchez was making the most of his remaining days off this summer before the forward returns to link up with his Arsenal team-mates ahead of the new Premier League season.

The 28-year-old was on hand to help Chile win back-to-back Copa America crowns this summer after Sanchez and company beat Argentina on penalties in the final in successive years.

Sanchez endured a tough second season in the Premier League after easing into life in England in the 2014/15 season, although the Chilean still finished on figures of 13 goals in 30 games.

The Chile star posted the above photo on his Instagram page with his family as they soaked up a beautiful view during some rare downtime for the former Barcelona man.

Arsenal finished in second place in the Premier League table last term ahead of their bitter rivals Tottenham Hotspur thanks to a 4-0 victory over Aston Villa at the Emirates Stadium.

The Gunners will start the 2016/17 Premier League campaign with a home game against Jurgen Klopp’s Liverpool side on 14 August.