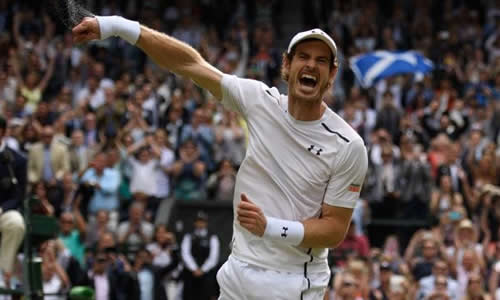 For the second time in as many months, Andy Murray is donating a winning shirt in aid of a special appeal.

The day after Andy Murray beat Novak Djokovic to become the first British man since 1931 to win the Italian Open in May, the Briton donated the shirt he wore in the final to “Friends of Sean”, a charity that offers care to permanently injured individuals. Now, a fortnight after winning his second Wimbledon title in London, Murray is doing it again.

CharityStars is auctioning the shirt he wore when beating Milos Raonic to raise funds for Malaria No More UK, the charity that was emblazoned across the sleeve of his shirt throughout the tournament.

Murray said: “I’ve signed and donated my winning Wimbledon match shirt for an auction for Malaria No More UK. It was awesome to be able to have them on my shirt during the tournament. We can end malaria deaths in my lifetime!”

The charity, which Murray has been supporting since 2009, is determined to make malaria a thing of the past by conquering this preventable and treatable disease which kills 438,00 people every year. The most vulnerable victims are children under five and pregnant women, mainly in Africa.

This latest charitable donation by Murray is one of many he has made over the years: It is no accident that he has won the ATP’s coveted Arthur Ashe Humanitarian Award for his fund-raising efforts.

He organised charity matches in aid of the Royal Marsden after friend Ross Hutchins was diagnosed with Hodgkin’s lymphoma and Elena Baltacha died of liver cancer.

He sent himself up in “Andy Murray: The Movie”, a comic sketch during Channel 4’s “Stand Up To Cancer” campaign, and has raised awareness for the work of UNICEF, the World Wildlife Fund, as well as Malaria No More.

Just before the Davis Cup final last November, he wrote a moving piece about cancer for The Players’ Tribune entitled The Good Ones. It began: “I’m 28. Twenty-eight feels… young. When I was little, of course, it didn’t feel that way. Twenty-eight seemed old. But now that I’m here, I know. 28 is… no time at all. My best friend, Ross Hutchins, got cancer at 28…”

And throughout 2015, Murray and his sponsors Under Armour and Standard Life donated to UNICEF’s campaign to support displaced Syrian children for every ace he served. ‘Andy’s Aces’ now exceeds £83,000.

CharityStars’ byline is “Live a dream, make a change”. To help make a change, bid for Murray’s signed Wimbledon shirt by 28 July 2016 at http://www.charitystars.com/andymurray

Road to Rio and beyond: What lies ahead for Djokovic, Murray, Federer, Nadal and more?