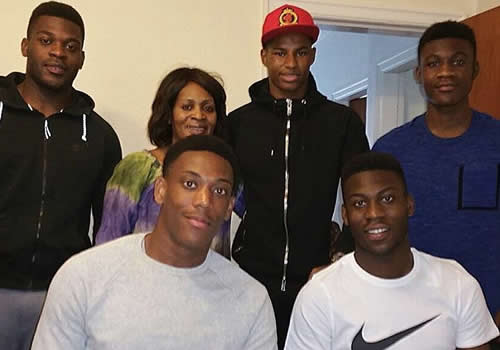 Anthony Martial and Marcus Rashford looked to be in good spirits as they paid a visit to Timothy Fosu-Mensah’s home on Friday.

Martial is currently adapting to life under new manager Jose Mourinho after he reported back to Carrington to begin his pre-season preparations with the club this week.

The France international had been given an extended summer holiday following his involvement in Euro 2016 but will now be firmly focused on impressing the new Manchester United boss.

Rashford also looked to be in good spirits as he posed in the picture alongside his Manchester United team-mates and some members of Fosu-Mensah’s family.

Fosu-Mensah posted the picture above on his personal Instagram account on Friday afternoon and wrote: “The bros visiting the fam.”

The trio will be eager to impress new manager Mourinho as they bid to hold down regular spots in the Manchester United first team next season.

All three players featured as Manchester United finished fifth in the Premier League last season and won the FA Cup under Louis van Gaal before the Dutchman was sacked and replaced by Mourinho back in May.