Arsenal have made a bid to sign Julian Draxler this summer, according to reports 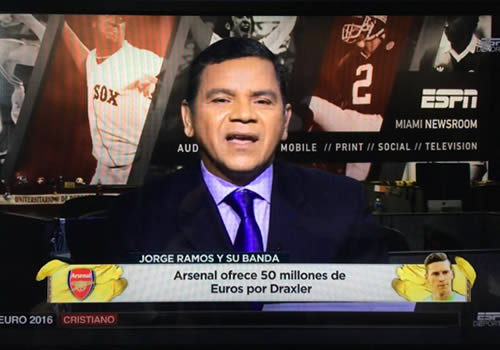 Arsenal have tabled a £43m bid to sign Julian Draxler from Wolfsburg this summer, according to reports.

ESPN is reporting that the north London side have made a bid to sign the Germany playmaker as Arsene Wenger bids to add some firepower to his squad ahead of next season.

A graphic captured from the sports news network (shown above) claims that the Gunners have made a bid for the attacker.

Wenger has clearly signalled his intention to bolster his attacking options at Emirates Stadium in the summer transfer window following the club’s failed bid to sign striker Jamie Vardy from Leicester City.

Despite being linked with a host of players this summer, Arsenal have only signed midfielder Granit Xhaka and Japanese forward Takuma Asano so far in the current transfer window.

Draxler is regarded as one of Europe’s top attacking talents and scored 10 goals for Wolfsburg last season.

Arsenal finished second in the Premier League last term, 10 points behind champions Leicester City – and were criticised for lacking a clinical edge in front of goal.