Photo: Arsenal star catches up with Chelsea legend in the US 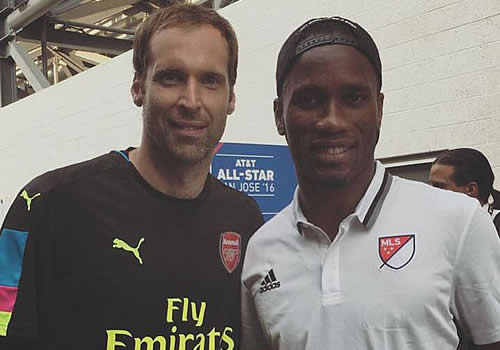 Petr Cech looked to be in good spirits as he took the time for a chat with Didier Drogba after Arsenal’s clash with the MLS All-Stars in California on Thursday night.

The former Chelsea striker once again returned to haunt the Gunners as he found the net in the 2-1 Arsenal win to improve his record of scoring 16 goals in 16 games against the north London side in San Jose.

Cech and Drogba played together for many years before the shot-stopper ended up swapping Chelsea for Arsenal in last summer’s transfer window.

And the pair looked to be on good terms, despite Cech having to pick the ball out of the net following Drogba’s goal.

Arsenal shared the picture above on the club’s official Snapchat account (@OfficialAFC) after Thursday’s friendly victory for the Gunners.

Cech will be hoping to help Arsenal get back to title-winning ways in the Premier League next season after they ended the last campaign in second place and without a trophy.

Wayne Rooney: What I really think about Jose Mourinho at Man United