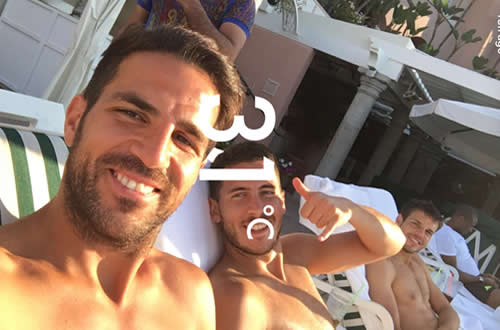 Eden Hazard looked to be in a relaxed mood as he and Cesc Fabregas enjoyed some downtime away from football during Chelsea’s pre-season tour of America.

Hazard reported back for Chelsea duty just before the Blues jetted off to the US after the Belgium international was given an extended summer break following his involvement in Euro 2016.

Fabregas was also given a slightly longer break by his club after featuring for Spain at the tournament in France this summer.

But the pair are now training hard as they look to impress new manager Antonio Conte ahead of the Italian coach’s first season in charge at Stamford Bridge.

However, both the Chelsea pair, along with Cesar Azpilicueta, enjoyed some time away from football as they soaked up some American sunshine before the club’s clash with Real Madrid on Saturday night.

Fabregas uploaded the selfie above onto his personal Snapchat account (@cescky4) without a caption in the 31 degree heat.