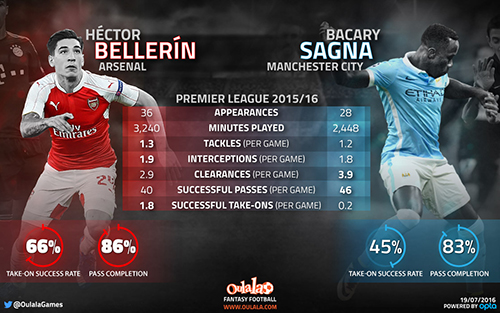 Pep Guardiola has only completed one big-money deal since the manager took over the reins of Manchester City this summer.

Spanish winger Nolita sealed a £13.8m move to the Etihad Stadium from La Liga side Celta Vigo earlier this month.

Now, the Citizens boss is being linked with a sensational swoop for Arsenal and Spain right-back Hector Bellerin as Guardiola looks to strengthen a problem position for the two-time Premier League winners.

Fantasy Football game Oulala have decided to pit the right-back against City’s current full-back and former Arsenal player – Bacary Sagna – in seven key areas to see how they compared in the Premier League last season.

Bellerin made eight more appearances than Sagna in the Premier League last season despite his inexperience, racking up 3,240 top-flight minutes.

The 21-year-old made 1.4 tackles and 1.9 interceptions per game which is narrowly better than Sagna.

The City defender, however, made more clearances than Bellerin per game (3.9 to 2.9) and the France international completed six more successful passes per game than his Arsenal rival (46 to 40).

But Bellerin finished with a pass completion of 86 per cent in comparison to Sagna’s inferior 83 per cent.

This left Bellerin with a 66 per cent take-on success rate.

The numbers suggest that City signing Bellerin would be a no-brainer, with the Gunners man coming out on top in five of the seven categories.