Anthony Martial is the most valuable player in world football under 21 years of age, according to a new study 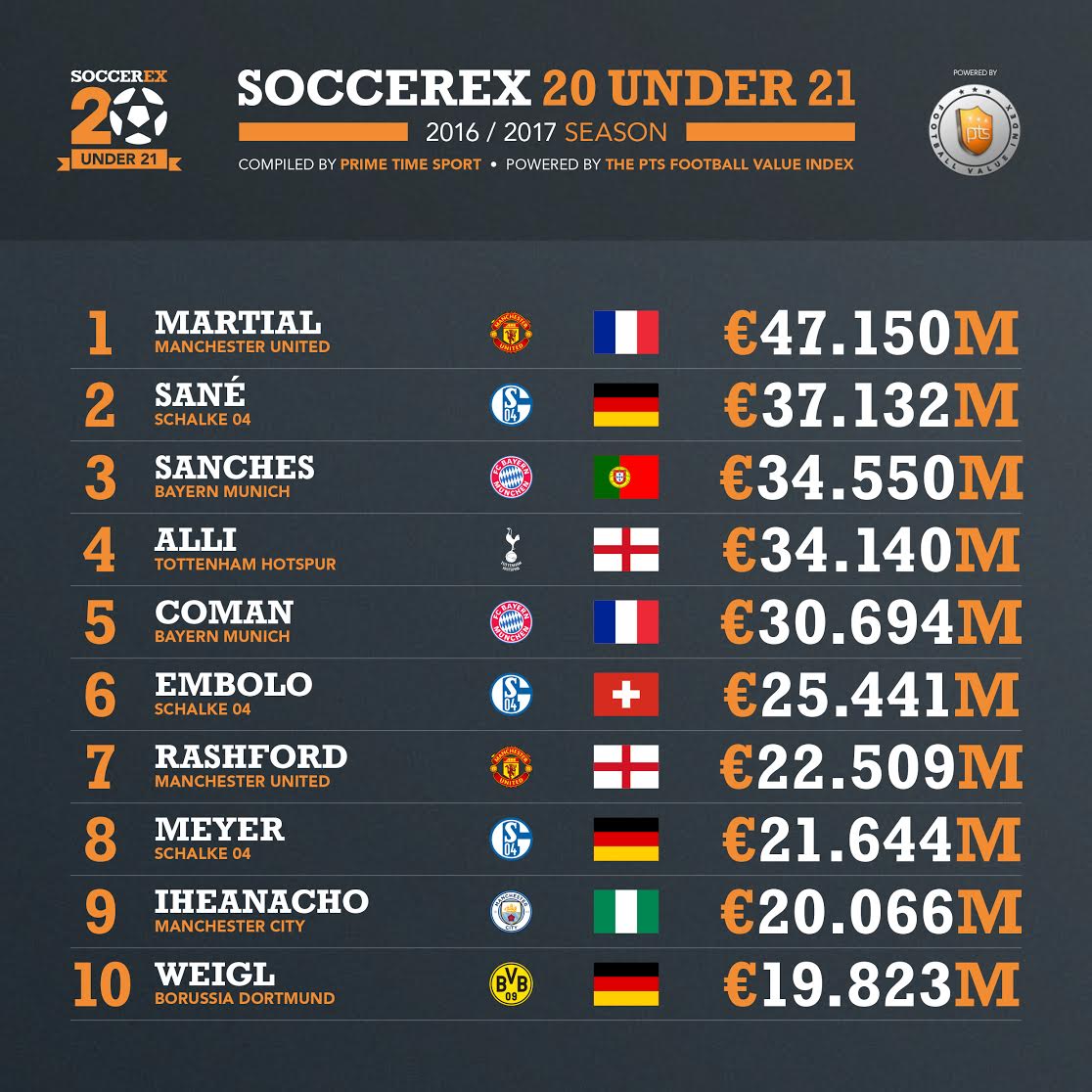 Anthony Martial is the most valuable under-21 player in world football, according to a study.

The Manchester United striker is valued at £39.7m (€47.15m) in the Soccerex report, which uses Prime Time Sport’s Football Value Index to rank footballers born on or after July 1 1995.

Martial, who was signed by Manchester United for an initial fee of £36m in September 2015, made a big impact in his first season in the Premier League and was part of the France squad that reached the Euro 2016 final on home soil before their extra-time defeat by surprise winners Portugal.

Martial’s transfer fee could reportedly rise to a maximum of £58m dependant on a number of bonus payments, including him winning the Ballon d’Or.

The striker is now gearing up for life at United under Jose Mourinho and is currently enjoying an extended summer holiday before linking up with the Red Devils squad.

Martial finished comfortably ahead of Schalke and Germany starlet Leroy Sane, who is valued at £31.2m (€37.1m) after a standout season for his boyhood club. The winger registered nine goals and seven assists in 42 appearances last season and has caught the eye of Manchester City and others this transfer window.

The valuation of Tottenham midfielder Dele Alli, £28.8m (€34.1m) confirms what we saw last season – that Mauricio Pochettino may have picked up a bargain, with the midfield playmaker joining from Milton Keynes Dons back in January 2015.

Alli has since gone to become one of the first names on an English team-sheet and is set to have a bright future with the Three Lions.

Meanwhile, Rashford’s value, £18.9m (€22.5m), is likely to soar after making the step up from under-18 football at Manchester United to an England shirt in a matter of months.

Despite making just 11 league appearances, Rashford was selected in England’s Euro 2016 squad and impressed as a substitute in the 2-1 victory over Wales.

The rest of the top 20 is made up of players from Germany, France, Portugal, Switzerland, Brazil, the Netherlands, Italy, Belgium, Nigeria, Argentina and Paraguay.

German players led the way, with 25 per cent of those in the top 20 being of German nationality, highlighting the strength of youth development in the country.

The top 10 young players will all be plying their trade in either England’s Premier League or Germany’s Bundesliga, demonstrating the financial muscle and stature of the two leagues.

There are, however, no players from Spain’s La Liga in the full list. This is despite the 2016 Champions League final being contested by Real Madrid and Atletico Madrid, indicating a greater reliance on older, more established players by the top Spanish clubs.

Only three players are currently playing their football outside of Europe, with Gabriel Jesus (Palmeiras) and Gabriel Barbosa (Santos) playing in Brazil and Argentine Giovani Lo Celso playing for Rosario Central in his native country. However, all three of these players have been heavily linked with moves to European clubs this summer.