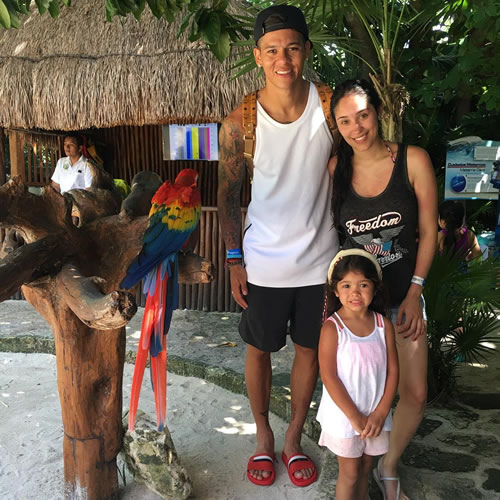 Marcos Rojo looked to be completely relaxed as he enjoyed some downtime with his wife and young daughter during his summer holidays.

The Manchester United defender is currently unwinding after his involvement in the Copa America with Argentina after his country lost on penalties against Chile in the final.

Rojo’s future at Manchester United under new manager Jose Mourinho appears has been a source of speculation in recent weeks, with ONE World Sports reporting that the defender has been told by the new boss that he is surplus to requirements at Old Trafford.

However, the Argentina centre-half does not appear to be letting the speculation affect his summer holidays and he looked in good spirits as he posed for a picture with his wife and daughter on Friday.

Rojo posted the picture above on his personal Instagram account and wrote: “Holidays to relax and unwind a bit with my loves before starting again, @eugelusardo thanks for these beautiful days.”

United confirmed the signing of Zlatan Ibrahimovic on a free transfer on Friday evening as Mourinho completed the club’s second signing of the summer following his appointment as manager.