Photo: Morgan Schneiderlin enjoys kickabout with his girlfriend ahead of Man United return 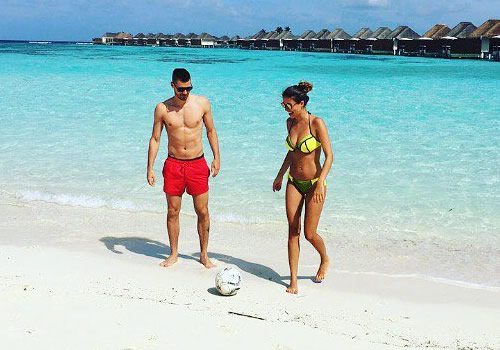 Morgan Schneiderlin looks like he has been making he most of his extended summer holiday following his involvement in Euro 2016 with France.

The midfielder was granted a longer summer break after Didier Deschamp’s men reached the Euro 2016 final, where they were beaten by Portugal in extra-time.

The France international enjoyed some downtime with his girlfriend Camille Sold in the Maldives as he recharged his batteries ahead of the new Premier League season.

And the midfielder looked to be in good shape as he enjoyed a kickabout with his partner on the beach in the Maldives.

Sold posted the picture above on her personal Instagram account and wrote: “Just one picture of our incredible holiday in Maldives. I will share some others soon Thanks @wmaldives #holidays #travel #maldives #whotel #fabulous #love”

Schneiderlin will be eager to return to Manchester United and report for duty under new manager Jose Mourinho.

The midfielder endured a mixed first season at the club last term and will be keen to impress the new boss ahead of the 2016-17 Premier League campaign.

New Arsenal signing tells fans what to expect from him