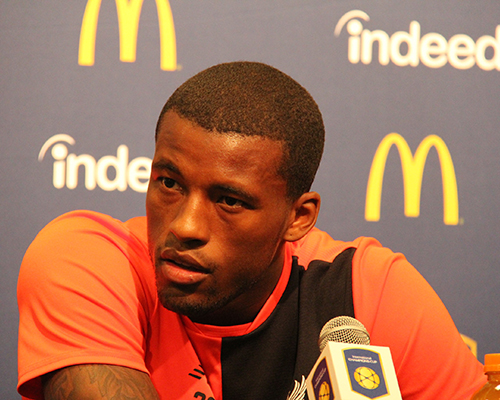 Georginio Wijnaldum has revealed that Dirk Kuyt helped to pique his interest in Liverpool a number of years ago before the Netherlands midfielder completed a move to Anfield this summer.

Wijnaldum scored a respectable 11 goals in 38 Premier League games after the Dutch star moved to the Magpies in an £11.4m deal from Eredivisie champions PSV Eindhoven last summer.

And the Liverpool signing lifted the lid on previous conversations that he had with former Reds striker Kuyt during national training camps with the Netherlands in previous years.

“I didn’t speak to him. Dirk played a lot of games for the national team. There we met each other a few years ago. He was talking about Liverpool,” Wijnaldum told his pre-match media conference on Friday evening.

“I was young and asking how the clubs was at that time. He told me a few great stories about the club – but that was a few years ago.”

Liverpool will take on Serie A giants AC Milan in the International Champions Cup at Levi Stadium in Santa Clara on Saturday evening.

Klopp’s side finished in eighth place in the Premier League table last season.