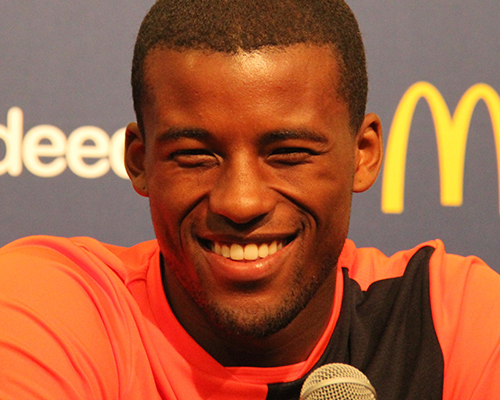 Georginio Wijnaldum has revealed Rafael Benitez’s one-word response when the Newcastle United manager learned that the midfielder had agreed a deal to join Liverpool.

The Netherlands international sealed a £25m move to the Merseyside outfit from the Magpies earlier this month after weeks of speculation linking Wijnaldum with a move away from St James’s Park.

Benitez spent six years in charge at Liverpool and won the Champions League and the FA Cup before the Spanish coach was sacked in 2010 following a disappointing campaign.

The former Inter Milan and Real Madrid manager took over the reins at Newcastle earlier this year but was unable to steer the Magpies clear of relegation.

And Wijnaldum, who could make his Liverpool debut against AC Milan at Levi Stadium in San Jose on Saturday night, lifted the lid on his conversations with Benitez before and after the completion of his £25m move.

“When the deal was reached about my transfer he said ‘congratulations’ – nothing more,” Wijnaldum told his pre-match media conference in San Jose on Friday evening.

On a previous conversation with Benitez over Liverpool, Wijnaldum added:

Liverpool lost 1-0 to Chelsea in their opening game of the International Champions Cup after Gary Cahill scored a tenth-minute winner.

The Reds have made seven signings in the summer transfer window so far, including Loris Karius, Ragnar Klavan and Sadio Mane.