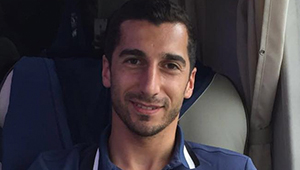 Henrikh Mkhitaryan took to Instagram to express the affection he already has for Manchester United after Saturday’s 2-0 victory over Wigan Athletic.

The Armenia international made his first appearance for the Red Devils at the DW Stadium alongside fellow new arrival Eric Bailly against the Latics in their pre-season friendly.

Will Keane and Andreas Pereira scored United’s goals as Jose Mourinho’s side made a winning start to their new era under the two-time Champions League-winning coach.

And the new Red Devils signing posted a selfie on his Instagram page from the comfort of the United team bus following their 2-0 victory over Wigan.

Mkhitaryan wrote the following caption on the photo-sharing app:

“In a good mood #inspired #blessed”

The Armenian midfielder scored 23 goals in 51 games in all competitions for Dortmund last season.

The Red Devils will begin their season with a clash against Leicester City in the Community Shield at Wembley.

United’s opening Premier League fixture is against Bournemouth at the Vitality Stadium.

Three reasons why Sadio Mane is an excellent Liverpool signing