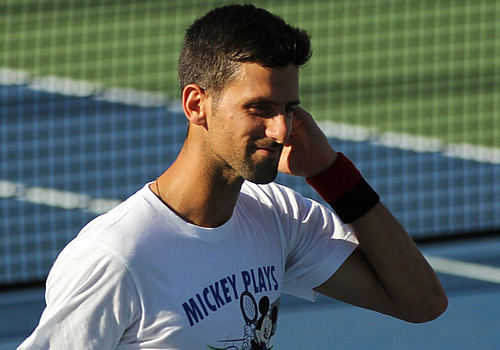 For the third year in a row, 2016 is proving to be a year dominated by the super Serb, world No1 Novak Djokovic.

It is 10 years since the 29-year-old won his first title, and he soon won his second that same year. The next season, in 2007, he won the first of what is now a record 29 Masters titles in Miami followed by his first Rogers Cup title in Montreal. As it happens, almost a decade later, he is favourite to win his fourth Canadian title in Toronto.

One year on from that first Masters success and Djokovic was a Grand Slam champion after winning what has now become a record tally of six Australian Open titles, and he became an Olympic bronze medallist, too,

But even that early rise to fame and on into the top four—which he has not left since, nine full years—perhaps did not prepare a tennis world so used to seeing Roger Federer and Rafael Nadal dominating the top two spots for what lay ahead.

That Olympic year of 2008 saw Djokovic win his first season-ending Masters Cup: He has now won the last four.

In 2009, he won five titles from 10 finals, but come 2011 he won 10 titles, three of them Grand Slams and five of them Masters, and he reached No1. As he begins his campaign in Toronto for a 30th Masters title, he has been No1 for 209 weeks, the fifth most in history, and for over two unbroken years.

But even that remarkable 2011 season would be far from unique.

And yet one target remained—and this year, he added that to his resume: The French Open. Which meant Djokovic had done what none of his rivals had: won all four Majors in a row.

By Wimbledon, he had already won 44 matches from 47, but the mental and physical effort of achieving that last link in the Grand Slam chain seemed to have taken a toll: He looked weary, and lost before the quarter-finals in a Major for the first time in seven years.

But it is a refreshed, bright-eyed-and-bushy-tailed Djokovic who has arrived in Toronto after playing just three matches in the last seven weeks. He has been enjoying, he admitted in his pre-tournament press conference, “quality time with family, time to regroup a little bit, and start training on the hard courts that I obviously like playing the most.”

At the Rogers Cup, he is of course the top seed in a field that is without the other members of that ‘big four’ club that he has now dominated for so long. But he will not miss fellow Rogers Cup champions Andy Murray, Roger Federer and Rafael Nadal: “I’m missing my wife and son the most, to be honest!”

However, he took time to reflect on that unexpectedly early loss to Sam Querrey at Wimbledon.

“I trust that everything happens for a reason. Obviously, I didn’t enjoy losing in the first week of a Grand Slam, but the next day everything was behind me. I had so many things to do in my private life, and was very much engaged in other activities—first of all being a husband and father, and then everything else aside that.

“You can always learn more from your losses than your wins. I had to look back and try to understand not just what happened in that match but in the six months prior to that… and that loss at Wimbledon cannot overshadow the results of the last 15 months.”

He might have said 30 months, or even more, but instead he warmed to his subject: “Winning the French Open was very special, very emotional, took a lot out of me. So I’m just glad that I was able to go through that part of the season, experience the ups and downs—and now it’s a new beginning.”

His family, mentioned many times, is clearly his rock and central to the mental wellbeing that underpins one of the most physically fast and flexible bodies in tennis.

Asked about the challenges in the modern game for younger players trying to make the breakthrough to the top level, he focused on the mental qualities.

“I think it’s all about balance, quality as well as quantity. At least it has worked for me. It’s important to have as much attention to the down time, the recovery, the mental and character work you put in as much as the physical work, as building muscles.

“To spend the same time thinking about your mind, and the way things work, and strengthen your character in order to get the best out of yourself as a person and as a professional athlete. It’s hard to keep that consistency and high performance going for a long time without your body or mind taking a toll.”

Djokovic has drawn No4 seed and Canadian Milos Raonic in his half, a formidable opponent who is fresh from his first Grand Slam final at Wimbledon. Djokovic understood the motivation that Raonic must have in front of his home crowd: “I’m sure Milos is now more motivated than ever to take that next step. He’s definitely one of the players that we are going to see a lot of in the future.”

But Djokovic, with the French Open put to bed for now, does have one big motivator left for himself this year, and not just his 30th Masters title. Rio 2016 begins in a fortnight,

“Olympic bronze stands out as one of the highest achievements I have because it comes from the most renowned sports event that has the most value in the history of sport. Carrying the flag for Serbia in London was also an unforgettable experience, and I look forward to Rio, I really do. It’s a huge honour to be part of the games… There’s no other event like the Olympics.”

He stopped short of expressing his wish to turn bronze into gold, but it would surely be the icing on the cake of a simply remarkable decade for Djokovic.

But should he fall short of gold, he has the chance of one more unique achievement immediately afterwards. If he wins the Cincinnati Masters, he will be the only player to win all nine Masters crowns.

Perhaps his career so far is, after all, just the beginning.