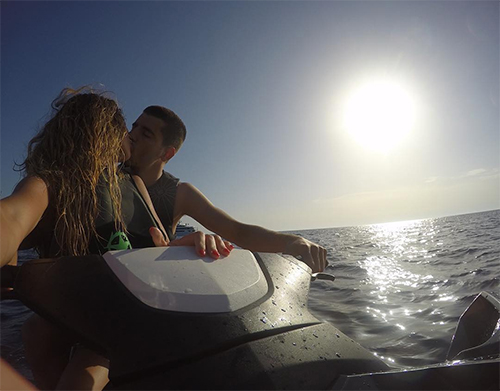 Alvaro Morata looked to forget about the speculation surrounding his future as the Real Madrid striker relaxed with his girlfriend on Friday.

The Spain international has endured a turbulent summer of transfer gossip after being linked with a host of Europe’s top clubs.

However, the Champions League holders are expected to sell Morata for almost double his transfer fee amid talk of interest from Premier League side Chelsea.

But the 23-year-old looked to switch off from football as Morata enjoyed a beautiful view with his girlfriend on a jet ski on Friday afternoon.

Morata posted the above photo on his Instagram page and wrote: “Vacations are starting”

The former Juventus striker scored 27 times in 93 games in all competitions for the Turin side during his two-year stay in Turin.

The Spanish striker was unable to help fire Juventus to victory over Madrid’s bitter rivals Barcelona in the 2015 Champions League final.

However, Morata did win back-to-back Serie A titles during his two-year stay in Turin.