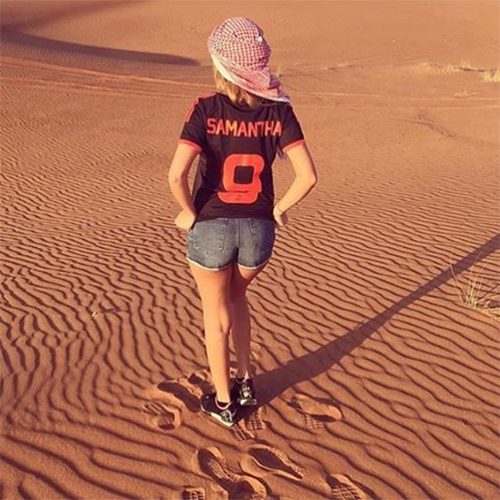 Jose Mourinho’s summer signing Zlatan Ibrahimovic revealed on the photo-sharing app that he would wear number nine this season following his move to Old Trafford from Paris Saint-Germain.

United confirmed the number switch on their official Instagram account as Martial was given the number 11 shirt for the forward’s first season under new manager Mourinho.

Martial was reported to have unfollowed United on Twitter in the wake of the shirt number controversy before the France forward swiftly re-followed his employers earlier this week.

However, the 21-year-old’s ex-wife Samantha was reported to have liked Ibrahimovic’s shirt number announcement on Instagram earlier this week.

And now the French beauty has taken to her Instagram page to post a photo of her very own number nine shirt with Samantha on the back.

Helena posted the above photo and wrote the following caption:

“I trust the fate ❤️ I find someone good ❤️ Everyone pays”