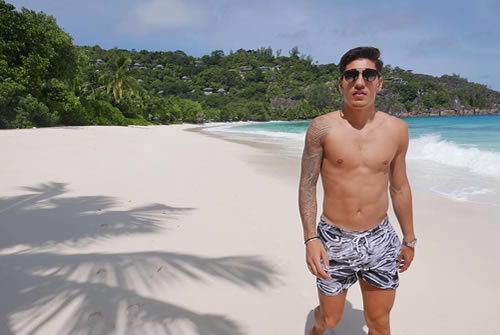 Hector Bellerin looks to be making the most of his time away from football this summer as he recharges his batteries with his girlfriend Berta Requeno on holiday.

The full-back is enjoying some well-earned rest after his involvement in Euro 2016 with Spain in France over the last few weeks.

Bellerin has quickly become one of the regulars in the Arsenal first team following his promotion to the side by Arsene Wenger.

And the young Spaniard appears to be completely relaxed as he enjoys some well-earned downtime in warmer climes before reporting back to Arsenal for pre-season training.

Meanwhile, his girlfriend Requeno used the same caption, as she shared the picture above on her own account.

Many of Bellerin’s Arsenal team-mates have already reported back to London Colney to begin their pre-season training preparations for the 2016-17 campaign.