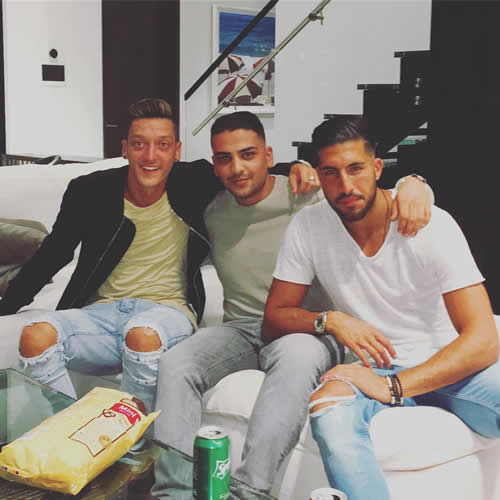 Mesut Ozil and Emre Can pose for a picture with a mate in the US Photo: cnyt12/Instagram

Mesut Ozil looks to be in good spirits as he unwinds from a gruelling season with Liverpool midfielder Emre Can in the US.

The Germany playmaker has been given an extended summer holiday following his involvement in Euro 2016 with his country in France and their run to the semi-finals.

Can is also enjoying some downtime away from football and has linked up with his Germany team-mate during his holiday in the States.

And Ozil was all smiles as he posed for a picture posted on Instagram with Can and a mate during their summer break.

Ozil has been one of Arsenal’s standout performers since his arrival in the Premier League from Real Madrid in the summer of 2013.

The playmaker won the FA Cup in his first two seasons with the north London club but was forced to settle for a disappointing trophyless campaign last term as the Gunners ended up in second place in the Premier League table, and 10 points behind champions Leicester City.

Photo: Cesc Fabregas all smiles as Chelsea return ahead of Liverpool clash