Cesc Fabregas is making sure that he keeps fit while on holiday... 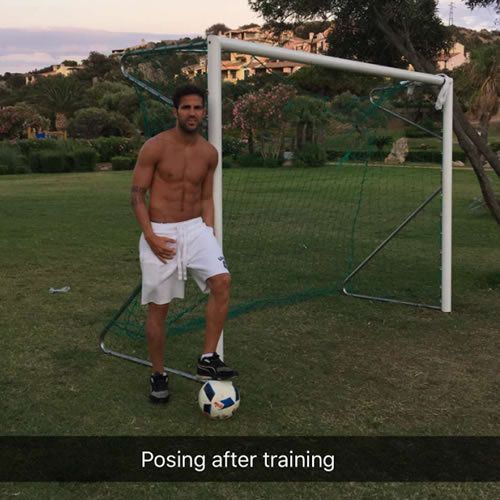 Cesc Fabregas may be still enjoying his summer holidays, but the Spanish midfielder is clearly determined to make sure that he heads back to Chelsea in peak physical condition.

The Spaniard has been given an extended break by the Blues following his involvement in Euro 2016 with Spain in France.

Many of Fabregas’ team-mates have already reported back to Cobham to begin their pre-season preparations under new manager Antonio Conte as the 2016-17 campaign draws ever nearer.

And although Fabregas may be enjoying some well-earned downtime in warmer climes with his family, the Spaniard is making sure that he is keeping fit during his break.

Fabregas posted the picture above on his personal Snapchat account (@cesky4) on Thursday, along with the caption: “Posing after training.”

Fabregas will be waiting to see what plans new boss Conte has for him at Chelsea following the Italian’s arrival at Stamford Bridge.

Conte was officially unveiled as the club’s new manager on Thursday as he was paraded in front of the media at Stamford Bridge.