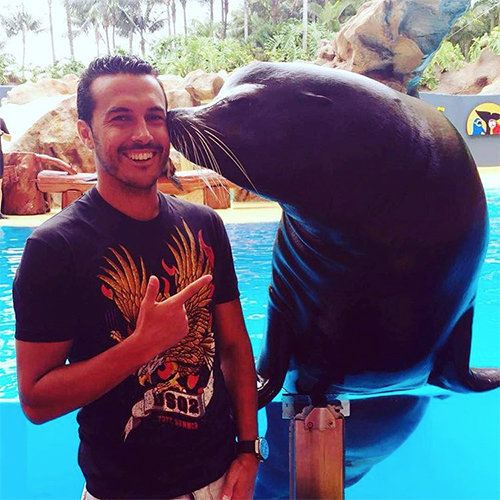 Pedro Rodriguez has been making a splash during his summer break ahead of his return to Chelsea for pre-season training.

The Blues winger was part of Vincent del Bosque’s Spain squad for their Euro 2016 campaign this summer, although Pedro struggled to secure a regular spot in the starting line-up.

Pedro, who was a key part of La Roja’s World Cup and Euro 2012 successes, made just two Euro 2016 appearances and racked up 17 minutes in the competition as Spain lost 2-0 to Italy in the quarter-finals.

The former Barcelona winger will have a new manager to impress at Stamford Bridge this season as ex-Italy head coach Antonio Conte took control of his first training session at the west London side on Wednesday afternoon.

However, Pedro is enjoying the delights of Tenerife – for now – as the Chelsea midfielder posed for a photo with his new seal friend during a holiday at the island’s Loro Parque.

Pedro posted the above snap on his Instagram page and wrote the following caption:

“Nice experience today in @LoroParque with my family. Introducing my friend Chago!”

The Blues winger scored seven times and made five assists in 36 Premier League appearances last season after a big-money move to Stamford Bridge from Barcelona.