The Manchester United goalkeeper is holidaying with his girlfriend 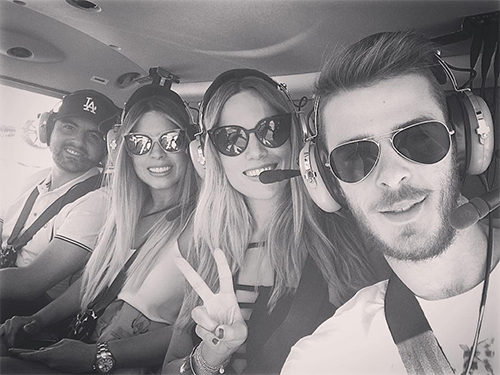 David De Gea was making the most of some downtime with his girlfriend and friends on Friday night ahead of the new Premier League season.

The Spain international was one of United’s best players last season despite the Red Devils finishing in fifth place in the table.

De Gea is set to remain at the 20-time English champions beyond the end of the summer after last year’s uncertainty surrounding his future.

The United shot stopper will be tasked with impressing new manager Jose Mourinho during the pre-season campaign.

But for now, De Gea was holidaying with his celebrity girlfriend Edurne and some pals on what appeared to be helicopter ride.

De Gea posted the above photo and wrote the following caption on his Instagram page:

“Enjoying a holiday in style!”

The Spanish goalkeeper has made 224 appearances for the 20-time English champions since his move to United from Atletico Madrid in 2011.

The Red Devils will begin their Premier League campaign with a trip to Bournemouth on 14 August.

United will be without Champions League football next term after finishing in fifth place in the table last term.