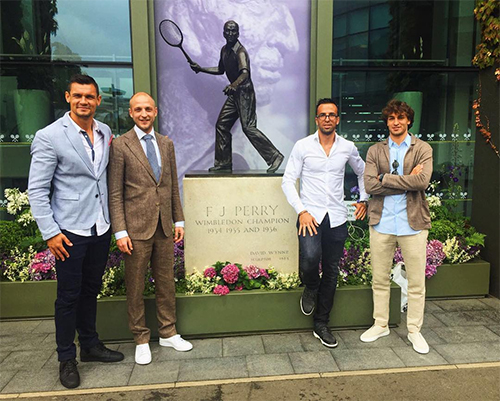 Dejan Lovren joined Lazar Markovic for the final day of Wimbledon ahead of demanding pre-season campaign with Liverpool.

The Croatia defender enjoyed a positive end to the 2015/16 Premier League campaign after securing a regular first-team spot in Jurgen Klopp’s side.

Markovic didn’t get the chance to impress the new Liverpool manager last term after Klopp’s predecessor Brendan Rodgers had sent out the winger on loan.

The 22-year-old made two assists in 16 appearances in all competitions for Turkish side Fenerbahce during a season-long loan spell.

However, Markovic is playing an active part of Klopp’s pre-season training as featured in a 1-0 victory over Tranmere Rovers at the weekend.

The Liverpool duo headed to Wimbledon on Sunday as British number one Andy Murray won his second men’s singles title at SW19.

The Croatian defender, who omitted from his national team’s squad for Euro 2016, moved to Liverpool in a £20m deal from Southampton in 2014.

Markovic, meanwhile, swapped Portuguese side Benfica for the Reds in the same summer transfer window under Rodgers.