Oscar posts a selfie with some members of the Chelsea squad, including John Terry 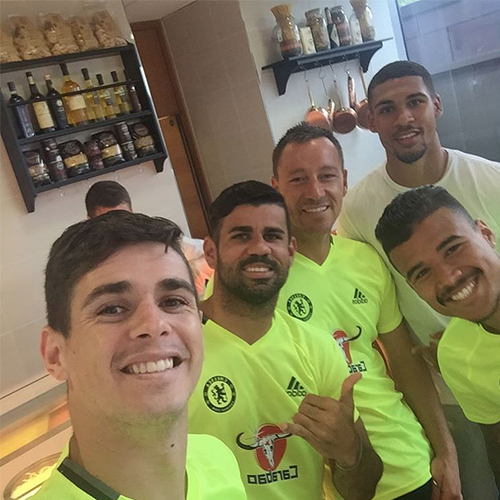 Diego Costa and Oscar were in high spirits with Chelsea captain John Terry at lunch as the Blues stepped up their pre-season preparations on Tuesday afternoon.

The west London side have a point to prove after a dismal 2015/16 Premier League campaign for the defending champions which resulted in Jose Mourinho’s sacking in December.

Guus Hiddink took over the reins of the Stamford Bridge outfit on an interim basis before Chelsea appointed Italy head coach Antonio Conte as their new permanent manager.

Terry signed a new one-year deal with the four-time Premier League champions earlier this summer to secure his future until next summer at the west London side.

And the 35-year-old defender was all smiles with Costa, Kenedy, Oscar and Ruben Loftus-Cheek at Cobham training ground on Tuesday afternoon.

Oscar posted the above photo on his Instagram page and wrote the following caption:

“Lunch time with the lads !! Hora do almoço !! #chelseafc #adidas”

Incoming manager Conte led Italy to the quarter-finals of Euro 2016 before a penalty shootout defeat by world champions Germany.

The new Chelsea boss won three successive Serie A titles with Juventus before standing down as manager to take over the reins of the Italian national team.