Photo: Fabregas, Willian all smiles as Chelsea squad go for a dip after Liverpool win 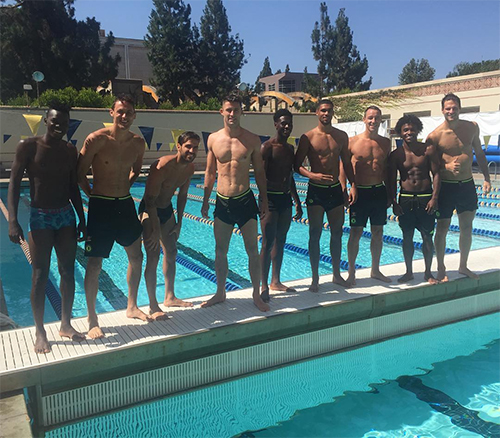 Willian snapped a photo of the Chelsea squad as the Blues celebrated their first win on American soil this summer with a dip in the swimming pool on Thursday morning.

Antonio Conte’s side were 1-0 winners against bitter rivals Liverpool thanks to Gary Cahill’s tenth-minute winner for the west London side although the pre-season friendly wasn’t without contoversy.

Spain midfielder Cesc Fabregas was sent off in the 65th minute of the International Champions Cup clash after the 29-year-old caught Liverpool defender Ragnar Klavan with a reckless challenge.

The Blues have now won two of their three pre-season friendlies since Conte took over the reins at Stamford Bridge following a dismal campaign under Jose Mourinho and Guus Hiddink last term.

And Chelsea midfielder Willian provided an insight into the high spirits in the Blues camp after the Brazilian posted the above photo on his Instagram page on Thursday.

Willian wrote the following caption on the photo-sharing app:

“All the boys enjoying the pool after a great win last night. #CFCtour #LA 🇺🇸”

Chelsea finished in tenth place in the Premier League table last season after a disappointing defence of their top-flight crown.