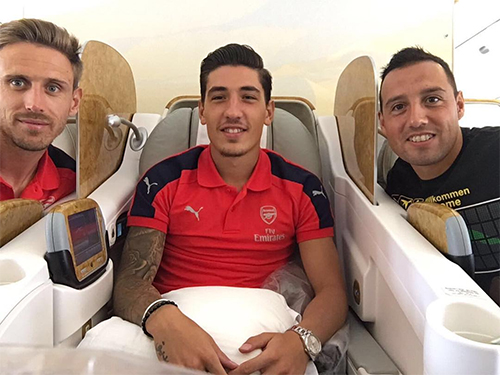 Hector Bellerin was all smiles with Arsenal duo Santi Cazorla and Nacho Monreal as the Gunners jetted off to California ahead of their pre-season clash against MLS All-Stars on Thursday night.

Arsene Wenger’s side are making the trip Stateside without some of their big-name signings such as Mesut Ozil and Alexis Sanchez as Arsenal gear up for the new Premier League season.

However, Bellerin and Cazorla will be two of the higher calibre players on show as the Spanish duo look to make an impression under the watchful eye of their manager Wenger.

The Spanish right-back, who has been recently linked with a move to Manchester City, returned to pre-season training last week after an extended break following Euro 2016.

And Bellerin looked pleased to be back with his Arsenal team-mates Cazorla and Monreal as the trio posed for a photo which the full-back posted on his Instagram page.

Bellerin posted the above photo on his Instagram page and wrote:

“🇬🇧✈️🇺🇸 Can’t wait to see all our fans in USA! #ArsenalUSA #COYG”