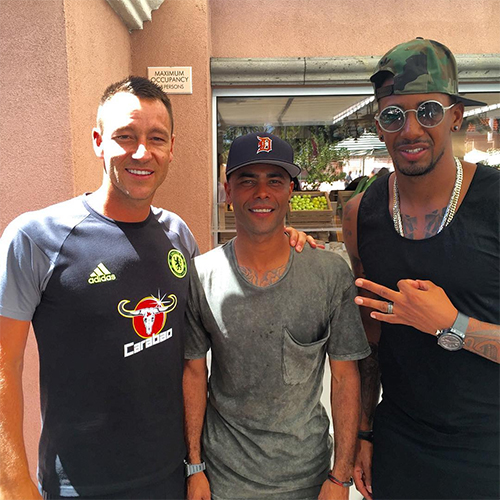 John Terry is all smiles with some famous faces Photo: John Terry/Instagram

The Blues squad are currently Stateside ahead of their fixture against bitter Premier League rivals Liverpool at the Rose Bowl in Pasadena on Wednesday night.

Cole and Terry won two Premier League titles, the Champions League, the Europa League and countless domestic trophies together during their time together at Stamford Bridge.

However, the former England defender completed a move to LA Galaxy earlier this year after calling time on his career with Serie A side Roma.

Boateng, meanwhile, is recovering from a demanding European championship campaign with Germany after Joachim Low’s side lost 2-0 to France in the semi-finals.

And the Chelsea captain, who is currently training under Antonio Conte, was full of praise for Cole and Boateng after bumping into the duo in a hotel in California.

Terry posted the above photo on his Instagram page and wrote the following caption:

“Great to see @theofficialac3 and @jeromeboateng today. The best left back ever and in my opinion the best CB about at the minute ⚽️ #chelsealegend #AC3”