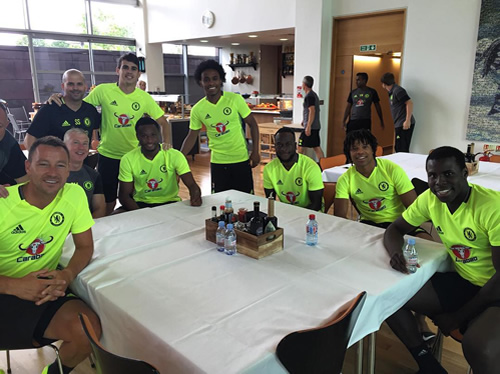 John Terry and his Chelsea team-mates looked to be in good spirits on the first official day of Antonio Conte’s reign as Chelsea manager.

The Italian manager officially took over at the west London club on Monday after the conclusion of Euro 2016.

Conte has been selected as the man to try and guide Chelsea back to the top of English football after their disastrous campaign last season.

And Terry certainly looked happy to be back at Cobham to report for his first day of pre-season training with a handful of his team-mates.

Terry shared the photo above on his personal Instagram account and wrote: “First day back at training.”

Chelsea are looking to bounce back from their terrible attempted title defence last season as they ended up 10th in the Premier League table.

Jose Mourinho was sacked as the club’s manager back in December, with Conte confirmed as his permanent successor earlier in the year.

Why Chris Coleman should resign as Wales manager