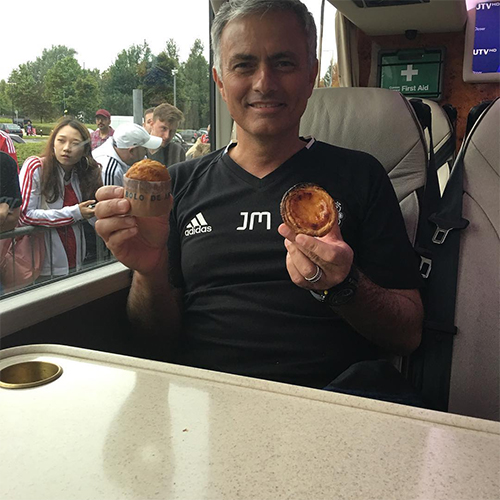 Jose Mourinho was so thrilled with Manchester United’s first pre-season victory that the Red Devils boss treated himself to some Portuguese treats on the way home.

The 20-time English champions eased to a 2-0 victory over Wigan Athletic at the DW Stadium as Will Keane and Andreas Pereira secured a winning start for the 53-year-old.

Mourinho was appointed as Louis van Gaal’s successor in May after the Red Devils finished in fifth place in the Premier League table and failed to qualify for the Champions League.

The new United boss has already been busy in the summer transfer window after completing three deals following the arrivals of Eric Bailly, Zlatan Ibrahimovic and Henrikh Mkhitaryan.

And ex-Chelsea manager tucked into some Portuguese grub following the 2-0 win as he reflected on a job well done so far at Old Trafford.

Mourinho posted the above photo on his Instagram page and wrote the following caption:

Juan Mata and Jesse Lingard scored United’s goals in a 2-1 victory at Wembley.

Three players Chelsea could sign from Serie A this summer