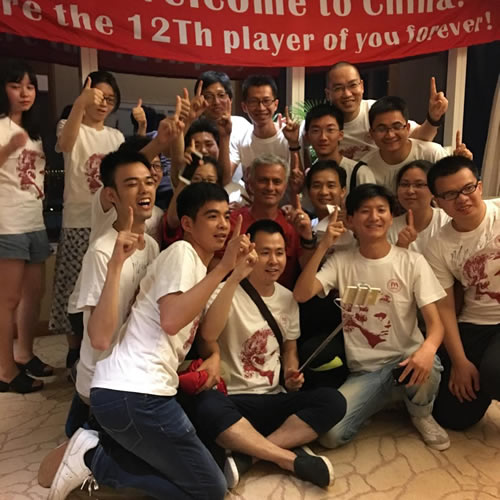 Jose Mourinho has taken to social media to express his gratitude to Manchester United’s supporters as he met some of the club’s fans in Shanghai on Thursday.

The Portuguese coach is currently in China with his squad for their pre-season tour as they prepare for their first campaign under Mourinho.

The former Chelsea boss is set to take charge of his side’s pre-season friendly clash against Borussia Dortmund on Friday as he looks to build on last weekend’s 2-0 win over Wigan.

And after training on Thursday, Mourinho spent some time meeting some of the local fans in Shanghai.

The former Real Madrid boss posed for the picture above, posted it on his personal Instagram account and wrote: “Special people, special fans 🇨🇳❤️ Always with me ❤️🇨🇳Thanks a lot my friends.”

Mourinho was quickly selected as the man to take charge from Louis van Gaal back in May after the club’s disappointing fifth-placed finish in the Premier League last season.

United won the FA Cup in Van Gaal’s final game in charge in May at Wembley.

Insider claims this player will be Man United’s next signing