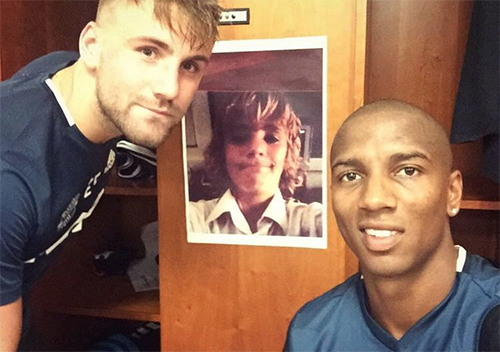 Ashley Young has taken to Instagram to wish Luke Shaw a happy birthday.

The England duo are rivals for a place in Jose Mourinho’s Manchester United in the coming season after Young played in a more defensive left-back role under Louis van Gaal last term.

The former Aston Villa defender was asked to fill Shaw’s void for much of the season after the England youngster broke his leg during a Champions League game last September.

However, the pair appear to have become firm friends since Shaw’s big-money move to Old Trafford from Southampton in the summer of 2014.

And Young cheekily posted a photo of Shaw in what appeared to be his teenage days on his Instagram page along with a message for the 21-year-old:

United finished in fifth place in the Premier League table following a disappointing end to their 2015/16 season.

The Red Devils did, however, win the FA Cup thanks to an extra-time winner from Jesse Lingard against Crystal Palace.

Mourinho was named as Van Gaal’s successor just weeks after their FA Cup triumph at Wembley.