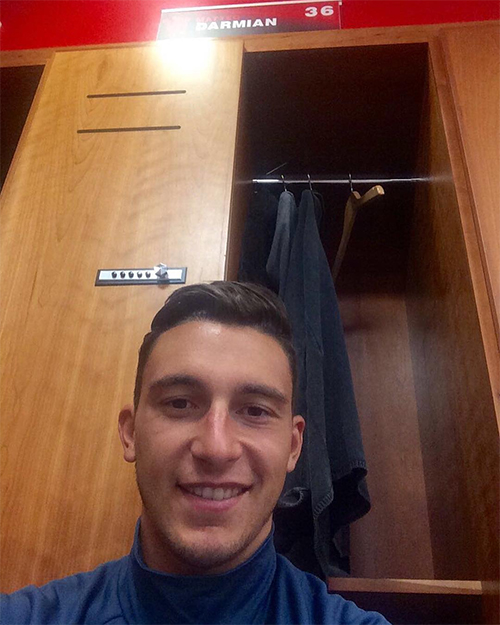 Matteo Darmian looked delighted to be back in training with his Manchester United team-mates following an extended summer break.

The Italy international has been holidaying in Ibiza with his girlfriend after helping Antonio Conte’s Azzurri side reach the last eight of the European championship in France.

However, the four-time World Cup winners lost on penalties to Germany in their Euro 2016 quarter-final after Graziano Pelle and Zaza missed their spot-kick attempts.

Darmian is facing increased competition for a starting spot following Luke Shaw’s return from injury and the signing of Eric Bailly in a £30m deal from Villarreal last month.

However, the 26-year-old versatile defender didn’t look too fazed as he posed for a selfie in the United dressing room ahead of the start of his pre-season campaign.

Darmian posted the above photo on his Instagram page and wrote the following caption: “Back to work 💪💪 #MUFC @manchesterunited 🔴⚽️🔴”

Jose Mourinho’s side lost 4-1 to Borussia Dortmund in their first pre-season friendly in China before their clash against Manchester City in Beijing was cancelled due to bad weather.

United will face Premier League champions Leicester City in the Community Shield at Wembley on 7 August.

Stan Collymore: This is who Arsenal need to sign this summer