Photo: New Arsenal signing all smiles with Campbell on flight to US 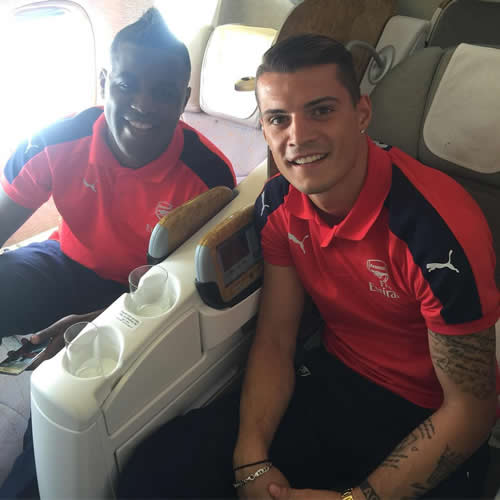 Granit Xhaka looked to be in good spirits as he posed for a picture with Joel Campbell as Arsenal prepared for their flight to the United States on Monday afternoon.

The new Arsenal signing – who joined the Gunners back in May – is preparing for the club’s pre-season tour to the US, with Arsene Wenger’s side taking on an MLS All-Stars team later this week.

Xhaka was Arsenal’s first signing of the summer transfer window and his arrival has been followed by the captures of striker Takuma Asano and defender Rob Holding.

And the Switzerland international looked to be in a relaxed mood as he posed for a picture with Campbell on Monday afternoon as the Gunners prepared for take-off.

Xhaka posted the picture above on his personal Instagram account and wrote: “On the way to USA with my friend Joel #ArsenalUSA @emirates”

Arsenal will be hoping to improve their form next season after they ended up second in the table and 10 points behind champions Leicester City last term.

Photos: New Arsenal signing all smiles on Gunners flight to the USA