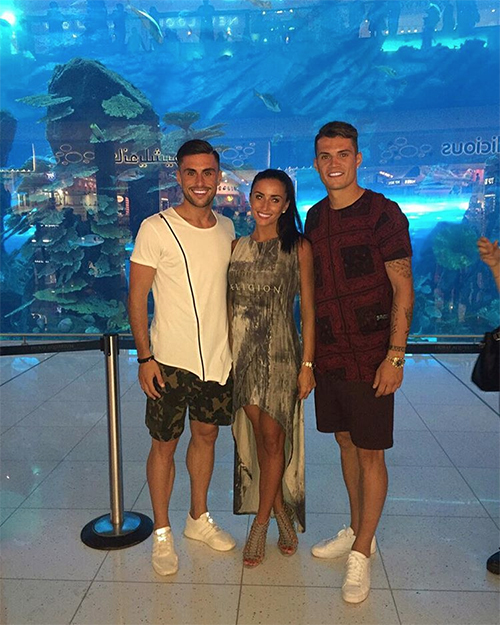 Granit Xhaka was all smiles with his beautiful fiancee an aquarium in Dubai as the new Arsenal signing made the most of his summer holidays on Saturday.

The 23-year-old midfielder has some free time on his hands after Switzerland crashed out of Euro 2016 after a penalty shootout defeat by Poland in the last 16 of the European championship.

Xhaka can console himself with the prospect of a first season at The Emirates after the Swiss midfielder moved to the Gunners in a £33m deal from Borussia Monchengladbach in May.

However, the new Arsenal signing has some downtime to enjoy before he links up with Arsene Wenger’s squad for his first pre-season as a player for the north London club.

Xhaka, who is Arsenal’s only signing of the summer transfer window so far, posted the above photo with his fiancee Leonita Lekaj and a friend at an aquarium in Dubai.

The 23-year-old midfielder scored three goals and made one assist in 28 Bundesliga appearances for Borussia Monchengladbach last term.

Arsenal finished in second place in the Premier League last season, although the Gunners failed to win any silverware.

Photo: Arsenal star Hector Bellerin soaks up the sun with his stunning girlfriend