Photo: New Chelsea signing all smiles with Eden Hazard on flight to USA 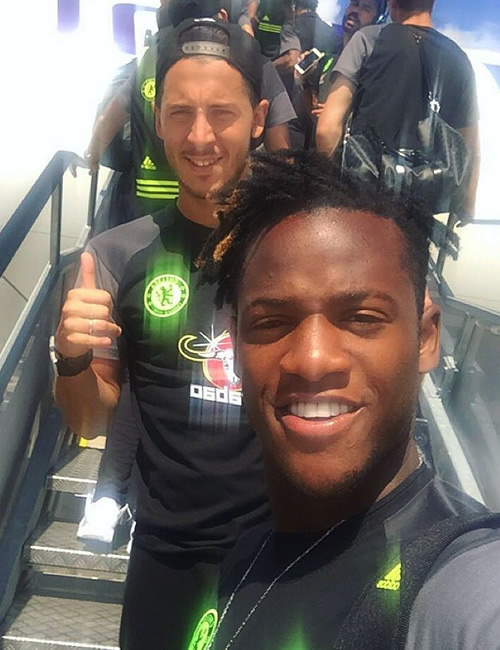 Eden Hazard looked to be in good spirits as he gave the thumbs up with new signing Michy Batshuayi before Chelsea’s flight to the USA for their pre-season tour on Sunday.

The Belgian playmaker has linked up with his team-mates after being given an extended summer holiday following his involvement in Euro 2016 in France.

Batshuayi became Cheslea’s first signing of the summer transfer window earlier this month as Antonio Conte moved quickly to bring the striker in from Marseille.

And the forward looked to be in a good mood as he snapped the picture above with Hazard and posted it onto his personal Instagram account on Sunday afternoon.

Batshuayi shared the snap on the app and wrote: “Welcome back @hazardeden_10 Off to #LosAngeles with the team ! @chelseafc”

Chelsea finished 10th in the Premier League table last season as they struggled for form before Jose Mourinho was sacked back in December.

The Blues moved quickly to appoint Conte as their new boss earlier in the year as they gear up for next season.