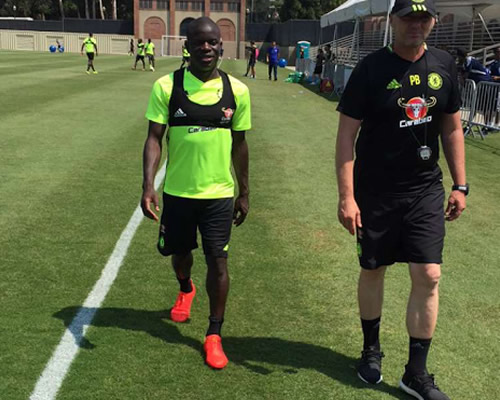 N’Golo Kante looked to be in good shape after taking part in his first training session with Chelsea over the weekend.

The France midfielder became the west London club’s second signing of the summer transfer window earlier this month as Antonio Conte prepares for his first season in charge at Stamford Bridge.

Kante joins Chelsea after having helped Leicester City win the Premier League title last season and having earned plenty of new admirers for his impressive form for the Foxes.

The midfielder was given an extended summer holiday after his involvement in Euro 2016 with France but has now linked up with Conte’s squad for the first time during their pre-season tour to America.

And Kante looked to be upbeat as he trudged off the training pitch following his first session with Conte’s squad.

Chelsea uploaded the picture above onto the club’s official Snapchat account (@chelseafc) over the weekend.

The Blues are looking to bounce back from the disappointment of their 10th-placed finish in the Premier League last season.