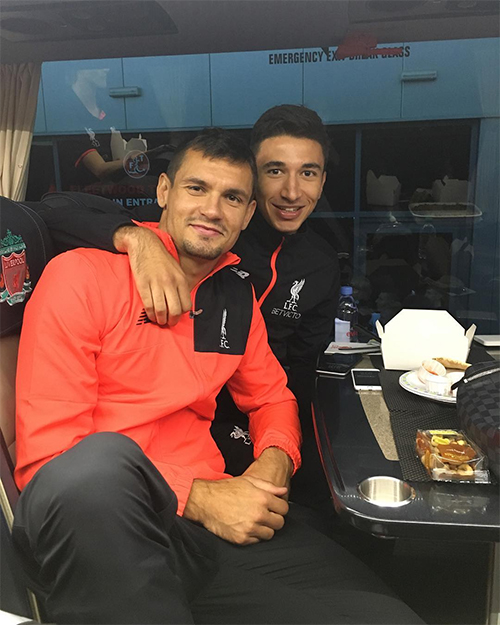 Marko Grujic was in high spirits with Dejan Lovren after the new signing scored on his first appearance for Liverpool in a 5-0 victory over Fleetwood Town on Wednesday night.

The Serbian youngster started for the Reds in their second pre-season game of the season and the 20-year-old required just 18 minutes to score his first Reds goal and break the deadlock.

Ben Woodburn and Lucas Leiva extended Liverpool’s lead to three goals in the second half before Roberto Firmino netted twice in the final 20 minutes of the friendly clash.

Liverpool agreed a £4.7m deal to sign Grujic with Red Star Belgrade in the January transfer window before loaning the midfielder back to the Serbian club until the end of the season.

And Grujic posed for a snap with his new team-mate Lovren following Liverpool’s landslide victory over Fleetwood on Wednesday night.

“First game and straight a goal, not bad @grujicmarko 😀👏🏻”

The Reds lost 3-1 to Sevilla in the Europa League final in Basel despite leading in the first half through Daniel Sturridge.