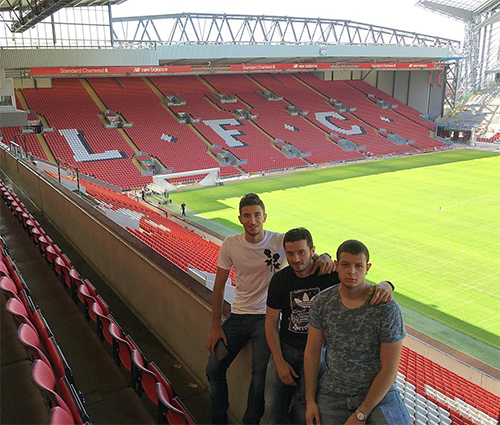 The Serbian teenager has finally linked up with his new Reds team-mates after the 18-time English champions agreed a fee with Red Star Belgrade for the playmaker’s services in January.

Grujic spent the remainder of the 2015/16 season on loan at the Serbian club, even captaining and scoring for his boyhood side for one of their final games of the campaign.

The 20-year-old has already proven a hit with Liverpool supporters after the highly-rated Serbian midfielder netted on his first appearance at the weekend, scoring the Merseyside outfit’s first goal in a 5-0 victory over Fleetwood Town.

And Grujic appears to be loving life at Liverpool after he opted to spend his day off hanging out at The Kop with some of his friends.

The Liverpool signing posted the above photo on his Instagram page and wrote the following caption:

The Reds finished in eighth place in the Premier League table last season.

Liverpool lost Manchester City and Sevilla in cup finals throughout the campaign.